Moderate Republican Rep. Brian Fitzpatrick said Monday that there are likely enough GOP votes for the bipartisan infrastructure bill to overcome the number of Democrats vowing to block it, as centrists from both parties pressure House Speaker Nancy Pelosi to bring the legislation for a vote.

Fitzpatrick, the co-chairman of the House Problem Solvers Caucus, also warned that moderate Republicans could turn against the compromise legislation passed by the Senate if Pelosi, D-Calif., delays the bill’s consideration or ties it to Democrats’ $3.5 trillion spending plan they hope to pass via budget reconciliation.

“If the BIF is stand-alone, there is significant Republican support,” the congressman from outside Philadelphia told Fox News. “If the BIF is linked to any other bill or held up for months, that support would fall apart.”

The comments give the nine moderate House Democrats demanding that Pelosi hold a vote on the infrastructure bill even more leverage as they try to get the $1 trillion legislation through the House.

The moderates, led by the other Problem Solvers Caucus co-chairman, Josh Gottheimer, D-N.J., are threatening to vote against the budget resolution recently passed by the Senate until the infrastructure bill “is signed into law.” The budget resolution will unlock the reconciliation process through which Democrats can circumvent the filibuster in the Senate and pass the $3.5 trillion spending plan without GOP votes.

Gottheimer’s group said in a statement Sunday that it still wants an infrastructure vote first, though not in such strong terms as their initial letter.

House progressives, meanwhile, are threatening to block the infrastructure bill until the Senate produces the reconciliation bill, likely later this fall. This leaves Democrats, whose 220-212 House majority makes them vulnerable to defections on key votes, at loggerheads about which part of President Biden’s agenda to advance first.

The Problem Solvers Caucus, which theoretically votes in a bloc on legislation it endorses, has 28 Republican members. But it is not a sure thing that all of them will back the bill. A senior Democratic aide, meanwhile, told Fox News last week, “There are dozens upon dozens who will vote against the BIF unless it’s after the Senate passes reconciliation.” 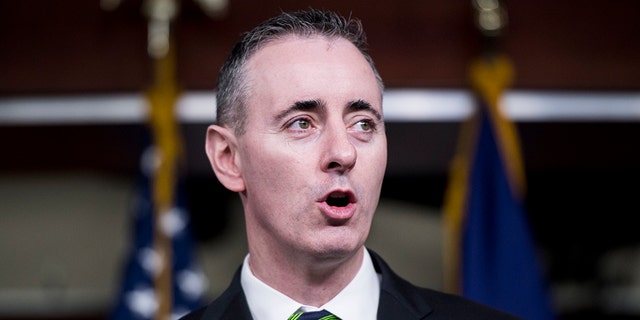 Rep. Brian Fitzpatrick, R-Pa., speaks during the Bipartisan Heroin Task Force news conference on Jan. 10, 2018. Fitzpatrick says that the number of House Republicans in favor of the bipartisan infrastructure bill is higher than the number of Democrats who want to block it until the Senate produces a reconciliation bill.
(CQ Roll Call via AP Images)

“If there is not a reconciliation bill in the House and if the Senate does not pass a reconciliation bill, we will uphold our end of the bargain and not pass the bipartisan bill,” Rep. Alexandria Ocasio-Cortez, D-N.Y., an influential House progressive, said on CNN’s “State of the Union” last week.

And according to Politico, Pelosi railed against the nine moderates in a caucus call Monday night. She made clear that she is unswayed by their threat to vote against the budget resolution and said “this is no time for amateur hour,” Politico reported.

Nevertheless, Fitzpatrick’s comments Monday further ratchet up the pressure from House centrists on Pelosi to usher through the $1 trillion infrastructure compromise that Biden enthusiastically endorsed in the Senate.

The White House maintains that it won’t tell congressional Democrats how to pass the president’s agenda. But one of Biden’s chief deputies, Transportation Secretary Pete Buttigieg, seemed to say recently that the infrastructure bill deserves independent consideration.

“These are two separate packages but they’re definitely both part of the president’s vision… I would encourage legislators to vote for policies that they think are good and vote against the policies they disagree with,” Buttigieg said on “Fox News Sunday” last week “My hope is that this will be voted on on its merits.”