Home » Politics » ‘He should have been there!’ Boris Johnson warned Red Wall snub ‘a mistake’ 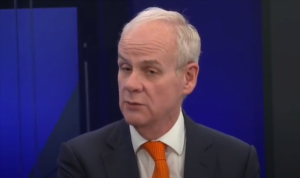 ‘He should have been there!’ Boris Johnson warned Red Wall snub ‘a mistake’

Lord Moylan pushed back against claims from Ms Dewberry that Mr Johnson didn’t care that much about his own UK citizens struggling.

The Prime Minister travelled to Ukraine’s capital Kyiv along with other Western leaders, in order to meet with Mr Zelesnky to offer Ukraine more support in the ongoing Russian invasion.

Both Lord Moylan and Ms Dewberry agreed that the Prime Minister needed to focus on taking advice from a smaller group of Number 10 advisers, in order for him to make the best decisions in the future.

“Because if they don’t understand the sentiment that a lot of Northerners and many people write and go, Michelle only feels like this because it’s about the North.

“It’s not necessarily about that, that was the peg, that was where he was supposed to be, there are so many people in this country that are struggling.

“And life is about to get so so much worse for them, and there’s something about Boris and I have backed him, you’ve been on this panel many times where I’ve backed him wherever it’s this that and the other, and all the rest of it.

“But I’m just getting the sense that he doesn’t seem to care that much.”

JUST IN: Have Your Say: What do you want to see Boris do to make Brexit a success?

“But I do agree, Number 10 there are too many advisers and too many people pointing in the wrong direction, pointing in different directions.

“And if you are the Prime Minister then there are tremendous demands on your time, and of course, it is to some extent who gets in there and who starts steering you off.

“He needs… I would say as a former adviser, though I never worked for him in Number 10, I would say he probably needs to focus on a smaller group of grown-up advisers and actually work with them.

“But I can’t defend this it is a mistake, he should have been there and he should’ve shown that priority, which is not to say he wasn’t doing important things in Ukraine as well.”

Despite Mr Johnson’s no-show at the Levelling Up conference, many Britons have been happy with the ongoing support he has been offering Ukraine.

Since the beginning of the Russian onslaught, Mr Johnson has been offering Ukraine aid in the form of weapons and finances, in order to help them fight off the Russian invasion.

Other Western leaders have also been doing the same, this week Ukraine’s President Volodymyr Zelensky met with other European leaders from France, Germany and Romania.

On the day of the meeting, President Zelensky’s Telegram account released a message reading: “Many days of this war have proved that Great Britain’s support for Ukraine is firm and resolute.

Mr Zelensky has previously praised the UK for their kindness and support, during the meeting, the British Government offered to train 10,000 soldiers every 120 days.

During his visit to Kyiv, Mr Johnson proposed to launch a new “major training operation for Ukrainian forces”.

The Prime Minister’s office added: “The UK-led programme would train and drill the Armed Forces of Ukraine using battle-proven British Army expertise, allowing them to accelerate their deployment, rebuild their forces, and scale up their resistance as they continue to defend their nation’s sovereignty against Russian invaders.

“International partners would be invited to host the programme if the offer is accepted by Ukraine.”