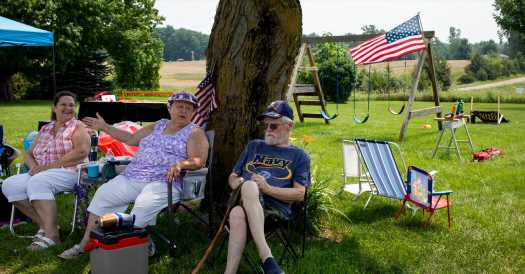 GRAND RAPIDS, Mich. — Representative Peter Meijer cites Gerald R. Ford as his inspiration these days, not because the former president held his House seat for 24 years or because his name is all over this city — from its airport to its freeway to its arena — but because in Mr. Ford, the freshman congressman sees virtues lost to his political party.

Ford took control after a president resigned rather than be impeached for abusing his power in an attempt to manipulate the outcome of an election.

“It was a period of turmoil,” said Mr. Meijer, who was one of 10 Republicans who voted to impeach former President Donald J. Trump for inciting the Jan. 6 Capitol riot. Ford’s greatest asset, he added, was “offering — this word is becoming too loaded of late — a sense of morals, moral leadership, a sense of value and centering decency and humility.”

“Sometimes when you’re surrounded by cacophony, it helps to have someone sitting there who isn’t adding another screaming voice onto the pile,” Mr. Meijer added.

Six months after the Capitol attack and 53 miles southeast of Grand Rapids, on John Parish’s farm in the hamlet of Vermontville, Mr. Meijer’s problems sat on folding chairs on the Fourth of July. They ate hot dogs, listened to bellicose speakers and espoused their own beliefs that reflected how, even at age 33, Mr. Meijer may represent the Republican Party’s past more than its future.

The stars of the “Festival of Truth” on Sunday were adding their screaming voices onto the pile, and the 100 or so West Michiganders in the audience were enthusiastically soaking it up. Many of them inhabited an alternative reality in which Mr. Trump was re-elected, their votes were stolen, the deadly Jan. 6 mob was peaceful, coronavirus vaccines were dangerous and conservatives were oppressed.

“God is forgiving, and — I don’t know — we’re forgiving people,” Geri Nichols, 79, of nearby Hastings, said as she spoke of her disappointment in Mr. Meijer. “But he did wrong. He didn’t support our president like he should have.”

Under an unseasonably warm sun, her boyfriend, Gary Munson, 80, shook his head, agreeing: “He doesn’t appear to be what he says he is.” 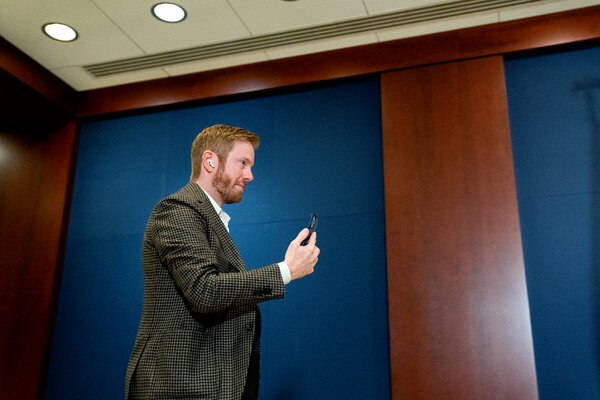 For all its political eccentricities, Michigan is not unique. Dozens of congressional candidates planning challenges next year are promoting the false claims of election fraud pressed by Mr. Trump. But Western Michigan does have one distinction: It is home to 20 percent of the House Republicans who voted to impeach Mr. Trump — that is, two of 10.

The other one, Representative Fred Upton, 68, took office in an adjacent district west and south of here the year before Mr. Meijer was born, 1987. But the two find themselves in similar political straits. Both will face multiple primary challengers next year who accuse them of disloyalty — or worse, treason — for holding Mr. Trump responsible for the riot that raged as they met to formalize the election results for the victor, President Biden.

Both men followed their impeachment votes with votes to create a bipartisan commission to examine the Capitol riot, two of 35 House Republicans to do so. Both face a backlash from Republican voters who are enraged by what they allege are an effort by the F.B.I. to hunt down peaceful protesters, a news media silencing conservative voices, a governor who has taken away their livelihoods with overzealous pandemic restrictions and a Democratic secretary of state who has stolen their votes.

Many of their grievances have less to do with Mr. Trump himself than the false claims that he promoted, which have taken root with voters who now look past him.

“People think people who support Trump are like ‘Trump is our God,’” said Audra Johnson, one of Mr. Meijer’s Republican challengers, explaining why she refuses to get inoculated against the coronavirus with a vaccine the Trump administration helped create. “No, he’s not.”

“People are terrified,” Ms. Johnson added over grilled cheese and tomato soup at Crow’s Nest Restaurant in Kalamazoo. She added, “We’re heading toward a civil war, if we’re not already in a cold civil war.”

In March, a Republican-led State Senate inquiry into Michigan’s 2020 vote count affirmed Mr. Biden’s Michigan victory by more than 154,000 votes, nearly 3 percentage points, and found “no evidence” of “either significant acts of fraud” or “an organized, wide-scale effort to commit fraudulent activity.”

“The committee strongly recommends citizens use a critical eye and ear toward those who have pushed demonstrably false theories for their own personal gain,” it concluded.

The Meijer name graces grocery stores that are a regional staple — founded in 1934 by the congressman’s great-grandfather, Hendrik Meijer, a Dutch immigrant — and a popular botanical garden and sculpture park, established by his grandfather, Frederik, that is one of Grand Rapids’ biggest attractions. His father, Hank, and his uncle, Doug, took over the Meijer chain in 1990 as Forbes-listed billionaires.

Peter Meijer’s pedigree is matched by his résumé: a year at West Point, a degree from Columbia University, eight years in the Army Reserve, including a deployment to Iraq as an intelligence adviser, and an M.B.A. from New York University.

But these days in some circles, “Meijer” is less synonymous with groceries, gardens and prestige than with the impeachment of Mr. Trump.

In his Capitol Hill office, Mr. Meijer said that in one-on-one discussions with some of his constituents, he could make headway explaining his votes and how dangerous the lies of a stolen presidential election had become for the future of American democracy.

“The challenge is if you believe that Nov. 3 was a landslide victory for Donald Trump that was stolen, and Jan. 6 was the day to stop that steal,” he said. “I can’t come to an understanding with somebody when we’re dealing with completely separate sets of facts and realities.”

At a recent event, he said, a woman informed Mr. Meijer that he would shortly be arrested for treason and hauled before a military tribunal, presumably to be shot.

“People are willing to kill and die over these alternative realities,” he said.

Yet at least one of his primary challengers is amplifying that alternative reality. Ms. Johnson, a pro-Trump activist, splashed onto the scene in 2019 as the “MAGA bride,” when she appeared at her wedding reception over the July 4 weekend in a Make America Great Again dress.

She helped organize armed protests of Gov. Gretchen Whitmer’s pandemic restrictions at the State Capitol in Lansing and traveled with a convoy of buses to Washington for Mr. Trump’s Jan. 6 protest against election certification.

“Honestly, they’re terrified that the F.B.I. is going to come knock on their door,” Ms. Johnson said.

Mr. Norton, who confronted Mr. Meijer at the Northview Fourth of July parade in a middle-class Grand Rapids neighborhood, said afterward that he was sure there was election fraud in 2020 and was pushing for an Arizona-style “forensic audit” that would go even deeper than the audit already conducted.

One of Mr. Upton’s challengers, state Representative Steve Carra, has introduced legislation to force such an audit in Michigan, even though he conceded that he had only skimmed the March report, which not only concluded that there was no fraud but called for those making such false claims to be referred for prosecution.

“To say that there’s no evidence of widespread fraud I think is wrong,” said Mr. Carra, who was elected to his first term in November, at age 32.

He sees a golden opportunity to finally unseat Mr. Upton, who has been in Congress since before Mr. Carra was born. Redistricting could bring a new cache of voters from neighboring Battle Creek who have not spent decades pulling the lever for the incumbent. Mr. Upton’s challengers are bringing his moderate voting record to primary voters’ attention.

But above all, there is Mr. Upton’s impeachment vote.

“When Fred Upton voted to impeach President Trump, that was the straw that broke the camel’s back for me,” Mr. Carra said, sitting on a park bench in Three Rivers, Mich.

Jon Rocha, another of Mr. Upton’s challengers, spoke in measured tones to a reporter about his rival’s vote to impeach. Mr. Upton had been acting out of emotion, said the former Marine, who is Mexican American and a political newcomer, and had failed to consider Mr. Trump’s due process or take the time to investigate.

But onstage in front of the crowd at the Festival of Truth, Mr. Rocha’s tone darkened.

“This country is under attack,” he thundered. “Our children are being indoctrinated to hate the color of their skin, to hate this country and to believe this country is systemically racist and meant to oppress anybody with a different skin pigment. I can attest to you, as an American Mexican, that is not the case.”

Oppression is a theme: Ms. Johnson said she understood — though, she hastened to add, did not condone — violence by beleaguered conservatives. Mr. Norton suggested that transgender women were driven by mental illness to lop off body parts, and yet it was only those who objected who were ridiculed. Larry Eberly, the organizer of the Festival of Truth, warned the crowd that “we’re being manipulated” into accepting coronavirus vaccines, bellowing to cheers, “I will die first before they shove that needle into my arm.”

In the end, none of this may matter to the composition of Congress. The anti-incumbent vote may be badly split, allowing Representatives Meijer and Upton to survive their primaries and sail to re-election.

Mr. Meijer’s district had been held for a decade by Justin Amash, a libertarian-leaning iconoclast who was fiercely critical of Mr. Trump and was the first House Republican to call for his impeachment. Amid the backlash, Mr. Amash left the Republican Party in 2019 to try to run as an independent. Then, when Mr. Amash found no quarter, he retired.

But Mr. Meijer will have his name, the support of the Republican apparatus and a formidable money advantage.

The question vexing him is not so much his own future, but his party’s. That is where he looks wistfully to Ford.

“Was he necessarily the leader on moving the Republican Party in a direction? I can’t speak to what his internal conversations were,” Mr. Meijer said. “But in terms of giving confidence to the country that Republican leadership could be ethical and honest and sincere, I think he hit it out of the park.”