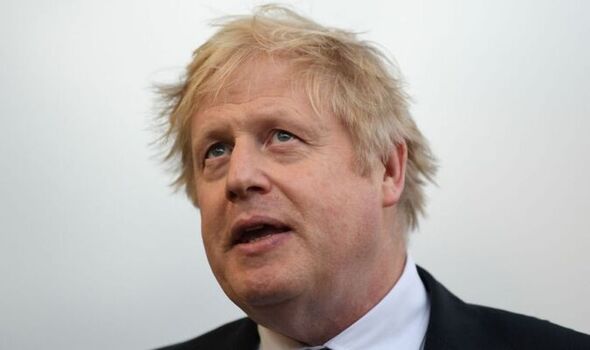 The Prime Minister made the comment to Japan’s premier Fumio Kishida yesterday as doubts grew over Moscow’s claims that it was pulling troops back from the border.

Ukraine’s President Volodymyr Zelensky and Nato chiefs said they had not seen evidence that Russian forces were returning to their bases as promised by Kremlin leaders.

Mr Johnson spoke to his Japanese counterpart by phone in his diplomatic push to ease the crisis. A Downing Street spokeswoman said: “The leaders discussed the deeply concerning situation on the border of Ukraine, and the Prime Minister thanked Prime Minister Kishida for his offer to divert Japanese energy supplies to Europe.

“Both agreed that the international community needed to stand united against an invasion of an independent country and said they would not tolerate Russia’s aggression.

“An invasion would shake the foundations of international order and have severe consequences, they agreed.”

The Government has pledged to double the current 850 troops in Estonia. And the first troops from the Royal Welsh battlegroup left their bases in the UK and Sennelager in Germany, along with additional tanks and armoured fighting vehicles, yesterday and are expected to arrive over the coming days.

Four additional UK Typhoon jets have also landed in Cyprus and will shortly begin to patrol the skies with Nato Allies.

Meanwhile, Liz Truss is to head to Ukraine today in the continuing diplomatic effort to face down the Russian threat.

The Foreign Secretary will deliver a keynote speech in Kyiv calling for nations to respect each other’s sovereignty and abide by their international commitments.

In a direct message to Vladimir Putin, she will urge the Kremlin to deliver on its promise to withdraw troops from the Ukraine border and reduce the tensions in the region or risk becoming an international “pariah”.

“We want to live in a world where people are in charge of their own future, free from aggression and coercion,” she is expected to say in her speech.

Defence Secretary Ben Wallace had said Russia’s claims should be treated with caution: “What we haven’t seen is evidence of withdrawal that has been claimed by the Kremlin. In fact we’ve seen continued build-up of things like field hospitals and strategic weapons systems.”

The Cabinet minister added ahead of meeting other Nato member nations in Brussels yesterday: “Until we see a proper de-escalation, I think we should all be cautious about the direction of travel from the Kremlin.” Mr Wallace said Russian forces massed on Ukraine’s border had not “taken the foot off the gas” in what appeared to be preparations for an invasion.

“There’s over 100 battalion tactical groups of the Russian ground forces – that’s 60 per cent of the Russian land combat power on the borders of Ukraine… 130,000-plus troops, both in Belarus and indeed Ukraine.

“But also out at sea there’s effectively a significant flotilla of Russian and amphibious landing ships, and indeed warships and missile ships, and from a Ukrainian point of view they’re fairly surrounded by a very large force of ready troops. That continues – they haven’t taken the foot off the gas.” He added yesterday: “We’re all here at Nato to try to work together to reduce tensions and try to de-escalate. But it’s a very significant force – it’s a force that would overwhelm Ukraine should it be deployed.

“The Ukrainians would put up a brave resistance. I made it very clear to the Russians the Ukrainians will fight, but those odds are overwhelming and no-one should delude themselves that they’re not.”

Nato secretary general Jens Stoltenberg said: “So far we have not seen any de-escalation on the ground – on the contrary, it appears that Russia continues the military build-up. We will continue to convey a very clear message to Russia that we are ready to sit down and discuss with them, but at the same time we are prepared for the worst.

“And if Russia once again invades Ukraine, they will pay a high price.”

Ukraine President Mr Zelensky added: “We react to the reality and we haven’t seen any withdrawal yet, we’ve just heard about it. I think all normal people expect de-escalation. As for the threat, I’ve said many times that we are calm about it because we remember that all this did not start yesterday – it has been happening for many years. We see it.”

Russia’s Foreign Ministry spokeswoman Maria Zakharova mocked the West over intelligence reports suggesting a Russian invasion of Ukraine was due to start yesterday.

She added: “Sorry for being a little late. I was just checking whether we are invading Ukraine or not – spoiler: we are not.” Ms Zakharova said Western media organisations were trying to do “everything in their power to make sure the war breaks out”.