Home » Politics » ‘It MUST change!’ Boris stands up to EU bullies after Sefcovic demands UK cave on Brexit

‘It MUST change!’ Boris stands up to EU bullies after Sefcovic demands UK cave on Brexit 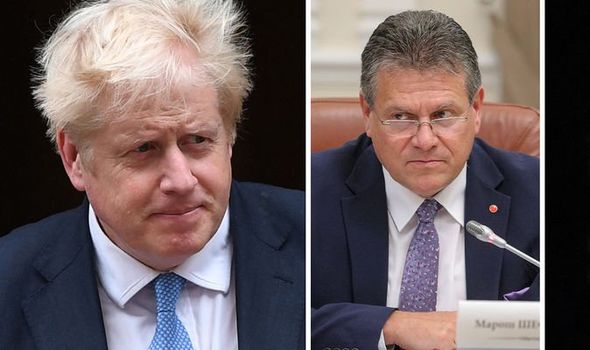 He claimed any attempt to renegotiate the Northern Ireland Protocol would cause “instability, uncertainty and unpredictability”.

Delivering a keynote speech at Queen’s University in Belfast, Mr Sefcovic said the agreement must be “properly implemented”.

This afternoon Downing Street reiterated its claims that the deal is unsustainable in its current form and said “significant changes” were required.

The Prime Minister’s official spokesman said: “We’ve spoken before about the Northern Ireland Protocol and the challenges that it continues to cause in Northern Ireland.

“That’s why we published our command paper earlier this year, and it’s why we remain committed to significant changes to make it durable for the future.”

He added the Government was focused on continuing to engaging with the European Commission to find a way forward to the problems caused by the Protocol for the people of Northern Ireland.

“Our focus is on talks continuing in order to determine whether we can make constructive progress.

“As we’ve said and we’ve said it for some time, we acknowledge that there are significant issues in the Northern Ireland Protocol,” he said.

“We will continue working to secure the changes we believe are required for the Protocol.”