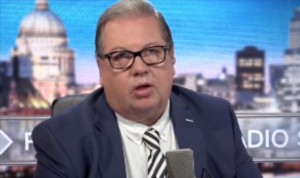 TalkTV caller says it is 'undemocratic' to force Boris out

Amanda from East Sussex discussed Tory MPs handing in letters of no confidence about the Prime Minister, with journalist Mike Graham. 15 percent of Tory MPs must hand in letters of no confidence, in order for a change of leadership to get underway. The Tory voter claimed that Boris was not the only person in Downing Street entirely to blame for Partygate. And went on to claim it would be undemocratic to push Mr Johnson out of Parliament as so many Britons voted him in.

Amanda from East Sussex told Talk TV: “I’m really uncomfortable about what is going on, about trying to force him out.

“Because if you look at the bigger picture here, the problem is, if they manage to achieve that, they are going to really upset a huge number of people in that country who voted for Boris.

“That’s undemocratic to do that, they’re setting a really bad president with this.

“And not only that, but Boris is not the person who is entirely responsible for Partygate, I’ll tell you who is.

JUST IN: Platinum Jubilee flypast aircraft: Every plane you could spot from Typhoons to Spitfire

Amanda from East Sussex added: “Simon Case the Civil Servant! Who works in Number Ten and he is getting off scot-free.

“Why is that! Why is nobody getting rid of Simon Case? He was the one that invited everyone to all the parties.

“And he was the one sending out the emails and basically taking the Micky out of the public by doing so.”

Prime Minister Boris Johnson has apologised on a number of occasions for his behaviour during the lockdown at Downing Street.

Some Tory MPs have been calling for him to step down as Prime Minister before the reports into rulebreaking were investigated, and released.

So far as many as 30 Tory MPs have called for Mr Johnson to quit.

Dame Andrea Leadsom broke her silence this morning, and wrote: “I believe in the importance of high standards of integrity, and that Members of Parliament must strive to be good role models, very specifically because we are the lawmakers and therefore in a trusted position of power and authority.

“I am determined to be clear about my views as a matter of personal integrity – the conclusion I have drawn from the Sue Gray report is that there have been unacceptable failings of leadership that cannot be tolerated and are the responsibility of the Prime Minister.

“Each of my Conservative MP colleagues and I must now decide individually on what is the right course of action that will restore confidence in our Government.”