Former shadow chancellor John McDonnell branded riots in the US Capitol Building on Wednesday night as “proto-fascist” as he called upon Prime Minister Boris Johnson to take a strong stand against Donald Trump. Supporters of the incumbent American President broke into the US Congress during a vote to certify Joe Biden’s victory in the November Presidential elections. Widely described as an attack on American democracy, the protests took place after President Trump addressed a crowd of supporters in Washington, giving a speech in which he continued to protest the election result.

Mr McDonnell told ITV’s Robert Peston: “I have to say tonight the Prime Minister should be condemning Trump himself not just the rioters because it is Trump who has incited this.

“We have got to stand together on this one now because we can’t allow this form of, as the American media described it, proto-fascism to be developed anywhere.”

“There were many in the American media who were actually calling out Donald Trump for what he was, proto-fascist,” he added.

“It had all those elements that could lead towards fascism.”

JUST IN: China cover-up: Xi Jinping ‘to be pushed out as Covid deaths TEN times higher’ than feared 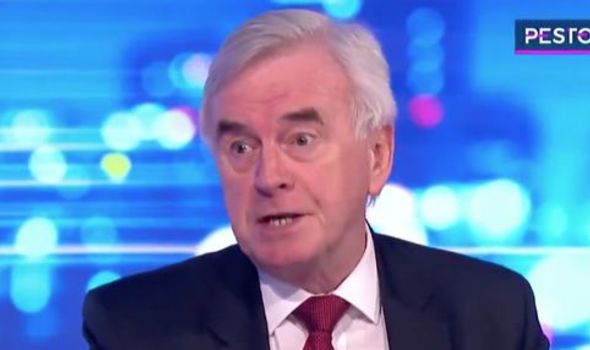 The Labour MP continued: “What happened here, he gets invited to this country.

“There is a hero in this as well you know who got condemned, John Bercow, the speaker, refused to have Trump in Westminster because he saw what he was about.

“We should have protested earlier on.”

Four people died in the harrowing violence in the US capital on Wednesday with a total of 52 people arrested after dozens of Trump supporters besieged the House of Representatives chamber, with thousands more sparking riots outside.

At the Save America rally earlier on Wednesday, Mr Trump had told his gathered supporters “we’re going to walk down” to Congress before calling on them to “do the right thing and only count the electors who have been lawfully slated”.

Mr Trump’s claims of electoral fraud have been dismissed by independent observers and a number of legal challenges launched by his campaign were unsuccessful.

Mitt Romney, a former Republican nominee for President, later issued a statement condemning the “insurrection” in Washington and blamed Mr Trump for the protester’s action.

He said: “What happened here today was an insurrection, incited by the President of the United States.

Mr Romney added: “Those who choose to continue to support his dangerous gambit by objecting to the results of a legitimate, democratic election will forever be seen as being complicit in an unprecedented attack against our democracy.

“They will be remembered for their role in this shameful episode in American history. That will be their legacy.”

Members of Congress have since returned to the Capitol building after Washington issued a curfew.