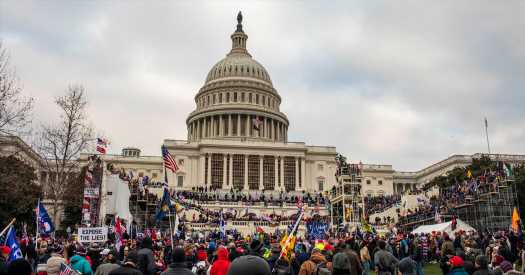 Justice Dept. Is Said to Be Examining Stone’s Possible Ties to Capitol Rioters

WASHINGTON — The Justice Department is examining communications between right-wing extremists who breached the Capitol and Roger J. Stone Jr., a close associate of former President Donald J. Trump, to determine whether Mr. Stone played any role in the extremists’ plans to disrupt the certification of President Biden’s electoral victory, a person familiar with the matter said on Saturday.

Should investigators find messages showing that Mr. Stone knew about or took part in those plans, they would have probable cause to open a full criminal investigation into him, according to the person, who spoke on the condition of anonymity to discuss a continuing inquiry. While that is far from certain, the person said, prosecutors in the U.S. attorney’s office in Washington are likely to do so if they can establish probable cause.

Mr. Stone, a self-described fixer for Mr. Trump, evaded a 40-month prison term when the former president commuted his sentence in July and pardoned him in late December. Mr. Stone had been convicted on seven felony charges, which included obstructing a House inquiry into possible ties between the Trump campaign and Russia’s efforts to interfere in the 2016 election, lying to Congress and witness tampering. But that pardon does not protect Mr. Stone from future prosecutions.

Justice Department officials have debated for weeks whether to open a full investigation into Mr. Stone, the person said. While Mr. Stone spoke at an incendiary rally a day before the attack, had right-wing extremists act as his bodyguards and stood outside the Capitol, those actions themselves are not crimes.

But the F.B.I. also has video and other information to suggest that in the days leading to and including the day of the assault, Mr. Stone associated with men who eventually stormed the building and broke the law, said the person familiar with the inquiry. That has given investigators a window to examine communications to see whether Mr. Stone knew of any plans to breach the complex.

The Washington Post earlier reported that the Justice Department was scrutinizing Mr. Stone’s possible ties to right-wing extremists at the Capitol.

The New York Times has identified at least six members of the Oath Keepers, a far-right extremist group founded by former military and law enforcement personnel, who guarded Mr. Stone and were later seen inside the Capitol after a pro-Trump mob took the building by force. Prosecutors have charged two of those men with conspiring to attack Congress.

A Justice Department spokesman declined to comment. Mr. Stone did not immediately respond to a request for comment.

In a statement posted online this month, Mr. Stone denied any role in the “lawless attack” and said that members of the Oath Keepers “should be prosecuted” if there was proof that they had broken the law. He added that he “saw no evidence whatsoever of illegal activity by any members” of the group.

A day after the Capitol assault, Michael Sherwin, the U.S. attorney in Washington, told reporters that he would not rule out pursuing charges against Mr. Trump or his associates for their possible role in inciting or otherwise encouraging the mob.