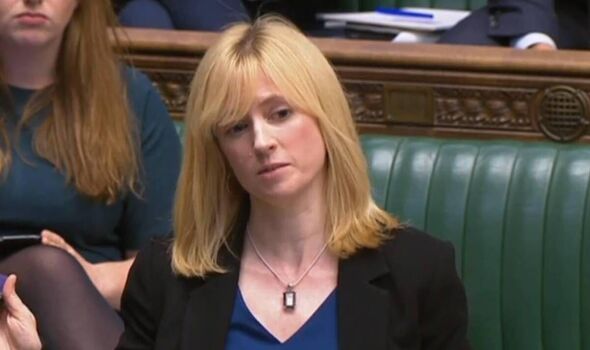 Ms Duffield faced the onslaught after raising concerns that Scotland’s attempt to make it easier for people to legally change gender would allow men to enter women’s spaces, such as changing rooms. She had to raise her voice to be heard above the noise coming from other MPs, including from her own party’s benches.

Ms Duffield later said she had been “shouted down” by Labour men “who clearly don’t want women to speak up for our rights to single sex spaces”.

“The protection of single sex spaces for the very most vulnerable women are at stake, so why on earth are Labour colleagues ok with this?”

The debacle came in a statement by Scottish Secretary Alister Jack confirming the Westminster government will block Holyrood’s gender recognition reform bill because it clashes with UK-wide equality laws.

He told the Commons Ms Duffield “deserves a lot of respect for her courage on standing up on this issue”.

Mr Jack said the government does not intend to veto Scottish Parliament legislation “whenever it chooses” but the bill would have “serious adverse effects” on existing laws.

“This is the first time the power has been exercised and I acknowledge that this is a significant decision,” he said.

“This is not about preventing the Scottish Parliament from legislating on devolved matters, but about ensuring we do not have legal frameworks in one part of the United Kingdom which have adverse effects on reserved matters.

“We should be clear that this is absolutely not about the United Kingdom Government being able to veto Scottish Parliament legislation whenever it chooses, as some have implied.

“The power can only be exercised on specific grounds and the fact that this is the first time it has been necessary to exercise the power in almost 25 years of devolution emphasises that it is not a power to be used lightly.”

Scottish First Minister Nicola Sturgeon said there was “no justification” for blocking the bill and warned the legislation would “inevitably end up in court”.

Ms Sturgeon said: “I can say categorically the Scottish Government will vigorously defend this legislation, but in doing so we will be vigorously defending something else, and that is the institution of the Scottish Parliament, the ability of MSPs – democratically elected – to legislate in areas of our competence.