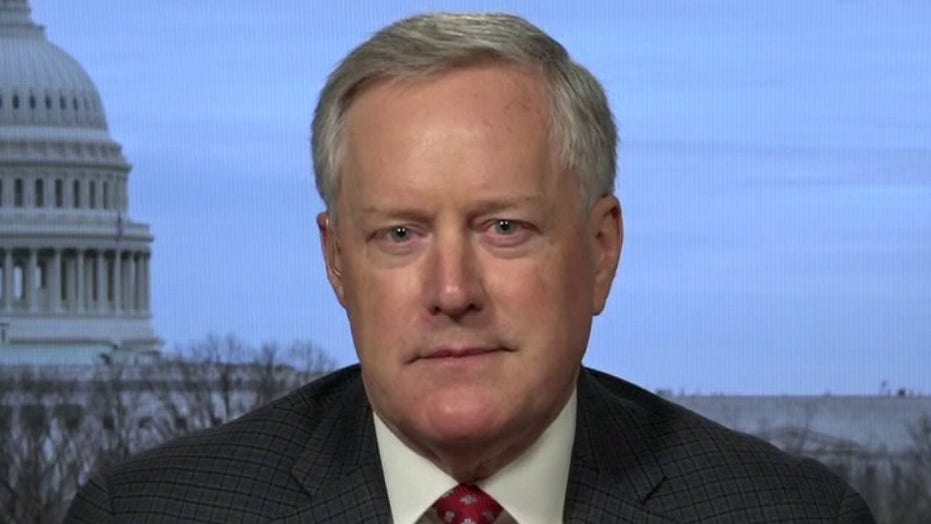 “I can tell you, it is not about America first, it’s about America last,” he said. “And we need to make sure we fight back on behalf of the American people.”

Meadows said the orders, which were most likely written by special interest lobbyists, go against the “very heart of America” including standards on energy, immigration and foreign relations.

DR. ROBERT JEFFRIES: IMPEACHMENT — WHY AMERICA MUST LET GO OF BITTERNESS TO HEAL

In order to push back on the president’s actions, Meadows said the GOP should start by being “more aggressive” in Texas and suggested inciting lawsuits and ensuring that American voices are heard after the closing of the Keystone XL Pipeline.

President Joe Biden speaks about the economy in the State Dinning Room of the White House, Friday, Feb. 5, 2021, in Washington. (AP Photo/Alex Brandon)

“We have Joe Biden saying he wants to unify but it’s more of a Joe Biden-go-it-alone kind of approach,” he said. “What we need to make sure is that we challenge it at every turn.”

“We’ve got a number of Trump-appointed justices in office that need to uphold the rule of law and, ultimately, give this authority back to Congress where it belongs.”

The former White House staffer also encouraged the continued fight against Trump’s “unconstitutional” second impeachment, which Meadows said is solely designed for House Democrats to gain “political vengeance” and “have a viral moment.”

“There’s all kinds of blame going around but yet, not a whole lot of accountability,” he said. “That accountability needs to rest with where it ultimately should be and that’s on Capitol Hill.”

Even though Trump is now considered a private citizen, Meadows said the Democrats will continue to put on a “political theater” by running the Feb. 9 trial.

“The American people are not going to have it,” he said. “It’s a violation of due process. It’s not what our founding fathers set up, and it sets a very bad precedent for future officeholders.”