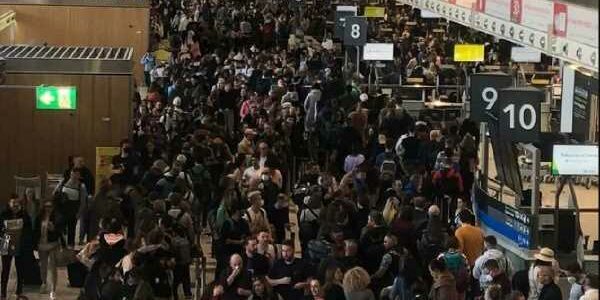 Dublin Airport bosses have been told to come up with solutions to resolve the lengthy delays faced by passengers by Tuesday morning. Officials were told of government ministers’ “immense disappointment and frustration” at the scenes over the weekend which led to more than 1,000 passengers missing their flights.

Taoiseach Micheal Martin said the situation was “unacceptable and not good enough”.

Concern has been growing about what could unfold at the airport ahead of the bank holiday weekend.

On Sunday, bosses warned of “significant queues” for passengers at the country’s main airport.

They were forced to queue outside the terminal and waited up three hours to check-in.

Speaking to reporters in Brussels, Mr Martin said: “It is unacceptable what has happened, it’s not good enough and people should not be treated in that way.

“And there will be daily meetings between the Department of Transport now and the DAA and Government is looking for a very clear plan to ensure that this type of thing doesn’t happen again and that whatever has to be done now is done to improve the operational efficiency of Dublin Airport.”

Asked if the army should be deployed to help address the shortfall in security staff, Mr Martin said: “I think it’s a question that DAA needs to develop the capacity very, very quickly to deal with this.

“The answer lies within human resource management within DAA and planning within the organisation also.”

Passenger Pauline Moore described the scenes at the airport as “total bedlam”.

In a post on Facebook, she wrote: “Have to vent my frustration. Arrived at Dublin Airport at 5.30.

“The queue was outside the door. Was in queue to security till 8.15.

“It’s total bedlam. Loads of flights missed. Not all security gates even open. Anybody going need at least four hours to get through.

In a reference to complaints by British passengers having to queue for post-Brexit passport controls across the EU, Brexiteer Robert Kimbell pointed out as he shared the news: “Meanwhile, in EU member state Ireland…”

DON’T MISS:
At least 14 dead after plane crashes minutes after take off [VIDEO]
Joe Biden will not supply Ukraine with rockets which can hit Russia [INSIGHT]
Brexiteers give Boris 2,000 ideas to obliterate EU rules [ANALYSIS]

In a joint statement after meeting the DAA officials, Mr Ryan and Ms Naughton said: “The ministers said that the excessively long queues and wait times were causing significant distress to passengers as well as reputational damage to the country from a business, travel, connectivity and tourism point of view.

“The ministers have instructed DAA to report back by tomorrow morning on solutions that can be put in place in advance of this bank holiday weekend to deliver an acceptable passenger experience for citizens and visitors departing from the airport.

“The ministers have asked DAA to consider all options that can be taken in immediate and medium term to resolve this matter.

“Daily meetings will be held at ministerial level with DAA until the difficulties persisting at the airport are satisfactorily resolved.

“Minister Naughton emphasised that it is the responsibility of DAA to resolve these matters to the satisfaction of passengers travelling in the days and weeks ahead.

“The ministers stated that the unacceptable queues should not be repeated this Thursday and Friday and into the bank holiday weekend and that intending passengers should be confident that they would make their flight with minimum inconvenience.”