The former Press Association news editor Mike Parry asked why he had to “subjugate” himself to sitting in the back of a car only travelling at 20 mph. He fumed that there was “literally nobody” on the roads that early in the morning while appearing on GB News.

He said: “This morning I went to work.

“I had to go to a tv studio. Car picked me up at 5:30 it’s dark and I drove in from Surrey where I live into Greater London.

“There is nobody on the roads.

“Why did I have to subjugate or subject myself to sitting in the back of my car doing 20 mph when there’s literally nobody on the road? 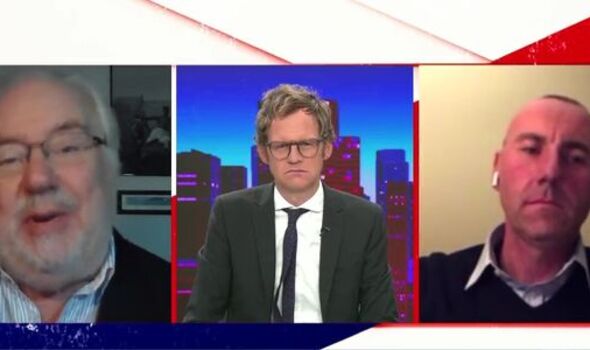 “I mean there’s no pedestrians .

“One of the reasons we have 20mph speed limits is to make sure we look after children who might be coming out of school.

“Or they might be walking on pavements near to their home.

Mr Parry also blasted the presence of cycle lanes which the former Sun reporter claimed restricted the ability of the “white van man” to deliver goods.

He said: “I’d like to extend this to say you know cycle lanes also restrict the ability to do what they’ve got to do and that is drive.

“You know if they are a white van man they’ve got to take goods into towns and that kind of thing.”

Mr Parry went on to argue for a more “variable” traffic policy with the former Daily Express news editor arguing that the current rules were bad for the economy.

The former Football Association press officer raged that due to the 20mph speed limit in place his driver had taken him 15 minutes longer than necessary to get to the studio.

He said: “Why can’t we have a more variable traffic policy?

“It’s not sensible to restrict a car at 5:30 in the morning with no traffic around to 20mph.

“All that does is damage the economy and I’ll tell you why because it takes another 15 minutes for my driver to get me to the studio I’m going to.

“That puts pressure on the company that’s driving me.”