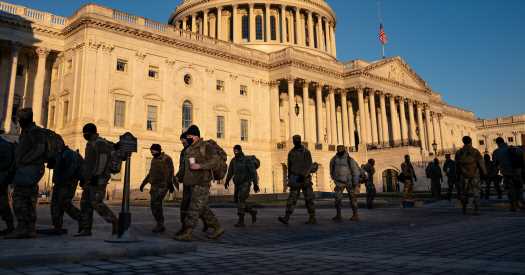 WASHINGTON — The military’s Joint Chiefs of Staff sent an unusual message to the entire American armed forces on Tuesday reminding them that their job was to support and defend the Constitution, and declaring that Joseph R. Biden Jr. would soon be their next commander in chief.

“As we have done throughout our history, the U.S. military will obey lawful orders from civilian leadership, support civil authorities to protect lives and property, ensure public safety in accordance with the law, and remain fully committed to protecting and defending the Constitution of the United States against all enemies, foreign and domestic,” said the one-page memorandum signed by the eight senior officers who serve as the Joint Chiefs.

“As service members, we must embody the values and ideals of the nation,” the memo continued. “We support and defend the Constitution. Any act to disrupt the constitutional process is not only against our traditions, values and oath; it is against the law.”

That the chiefs, led by Gen. Mark A. Milley of the Army, found it necessary to remind their rank and file of their sworn oath to the country was extraordinary. But the memo came as federal law enforcement authorities were pursuing more than 150 suspects, including current or former service members, involved in the mob that stormed the Capitol last week.

It was also the latest example of an apolitical American military and its top leadership thrust into an awkward, even potentially dangerous, position of possibly having to weigh dubious orders from the president against their oath to uphold the Constitution.

Defense Department officials have expressed worries this week that some of the rioters who assaulted the Capitol are former military members. While the Pentagon has not announced a specific search for deployed National Guard troops with sympathies for the pro-Trump protesters, officials said they were reviewing photographs and videos from the siege.

Law enforcement authorities, responding to threats of violence before the presidential inauguration on Jan. 20, say up to 15,000 National Guard troops would be deployed to the nation’s capital in the coming days.

“We do not tolerate extremists in our ranks,” a Pentagon spokesman, Jonathan Hoffman, told reporters on Tuesday.

Capt. Emily Rainey, an Army officer who told The Associated Press that she had transported more than 100 people to Washington for the Trump rally, was being investigated by the Army for any connection to the riots. Ms. Rainey had resigned from her post in October but was not set to leave until this spring.

Senator Tammy Duckworth, an Illinois Democrat on the Armed Services Committee, asked the acting secretary of defense, Christopher C. Miller, this week for the military’s various law enforcement agencies to cooperate with the F.B.I. in investigating whether current or former service members were involved in the deadly mob.

The events last week did not appear to accelerate the momentum on Tuesday for Mr. Biden’s push to quickly confirm his pick for secretary of defense, Lloyd J. Austin III, as his team had hoped would be the case. General Austin, a retired four-star Army general, will need a waiver from Congress to serve in the role, as is required for any Pentagon chief who has been retired from active-duty military service for fewer than seven years. (The general, who would be the nation’s first Black defense secretary, retired in 2016.)

At a hearing on the subject at a Senate Armed Services Committee on Tuesday, the majority of lawmakers from both parties cast doubt on the process, arguing that the exception that was made four years ago for President Trump’s first defense secretary, Jim Mattis, a retired four-star Marine officer, was one time too many.

The riot inside the U.S. Capitol on Wednesday, Jan. 6, followed a rally at which President Trump made an inflammatory speech to his supporters, questioning the results of the election. Here’s a look at what happened and at the ongoing fallout: