The Minneapolis City Council in a near-unanimous vote Friday approved a resolution calling on law enforcement to stop using tear gas, rubber bullets and other nonlethal munitions during protests, according to reports.

The 11-1 vote came on the sixth straight night of protests in nearby Brooklyn Center, where Daunte Wright, 20, was fatally shot during a traffic stop Sunday.

Minneapolis was also bracing for potential unrest when the Derek Chauvin murder trial concludes. The former Minneapolis police officer is accused in the police-custody death of George Floyd.

Ellison added that he didn’t believe the munitions were useful in dispersing protesters. 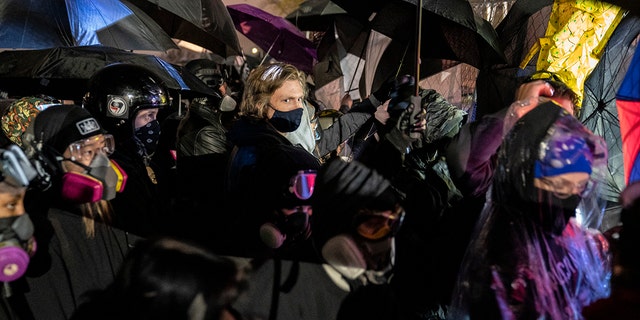 Demonstrators using umbrellas as shields against potential crowd control weapons take part in a protest in response to the fatal shooting of Daunte Wright during a traffic stop, outside the Brooklyn Center (Minn.) Police Department on Thursday, April 15, 2021. (Associated Press)

“They’ve always sort of bubbled into more chaotic situations and they’ve always created the atmosphere for folks to be … enraged,” he said, according to the Star Tribune of Minneapolis.

“But it also emboldens those individuals who … are here to strike harm and chaos and destroy our city,” Arradondo said.

The resolution doesn’t actually affect law enforcement’s ability to use tear gas and munitions, according to the Star Tribune.

Council President Lisa Bender called the vote “a statement of the values of the City Council.”

Council Member Linea Palmisano, the only no vote, said she feared law enforcement changing its tactics in the midst of the protests when everyone is already trained on current protocol would be a “failure of leadership.”

Meanwhile, a federal judge in Minnesota issued a restraining order Friday prohibiting police from arresting or using force against journalists during protests.