New York (CNN Business)A version of this article first appeared in the “Reliable Sources” newsletter. You can sign up for free right here.

Protests were documented in dozens of Russian cities on Sunday — risky actions against a war that Russians are not supposed to call a “war.”

OVD-Info, an independent monitoring group that tracks detentions in Russia, reported that at least 4,640 people were detained during protests in 147 cities. The Russian state news agency TASS, citing the Russian Interior Ministry, pegged the number of arrests at 3,500.

News accounts of the protests were limited, owing to a new Russian law that criminalizes journalism in the country. But some photos and videos were still available — and that’s the point I want to underscore. 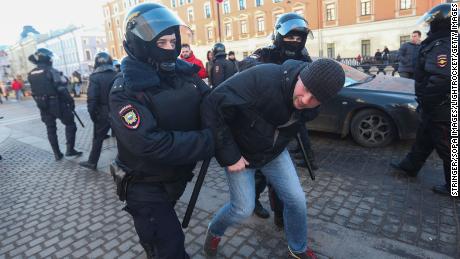 Vladimir Putin and his allies are building digital and legal walls to shield Russians from the truth. People in other countries are also noticing the consequences — like a sudden lack of live reports from Moscow. The clampdown that began on Friday remained in effect through Sunday. But history tells us that information almost always finds a way out.

Now, that doesn’t always mean people will be able to access it. If you live in Russia, “you have to exert a lot of effort to find out what’s really going on in Ukraine,” Julia Ioffe told me on Sunday’s “Reliable Sources.” “If you just watch state TV, everything is going great, there are no refugees fleeing the ‘liberating’ Russian army, nobody is bombing civilian homes,” etcetera.
Furthermore, access to information doesn’t mean that people will act on it. Or that it will believed. Valerie Hopkins of The New York Times is out with a new story about the confounding experience of Ukrainians who are finding that relatives in Russia “don’t believe it’s a war” at all. “These relatives have essentially bought into the official Kremlin position,” Hopkins wrote. As we have been documenting, Russian propaganda is incredibly persuasive to some viewers.
But facts still get out, no matter the digital walls or wild counter-programming. Even as Putin tries to turn Russia into a “sealed room,” as Thomas Friedman said on “Reliable,” the world is still getting glimpses inside the room…

Committee to Protect Journalists exec director Robert Mahoney said he is tracking numerous reports of local journalists being arrested while attempting to cover protests in Russia. Locals “can’t report on the war anymore, they can’t call a war a war, and many of those independent journalists have fled to neighboring countries,” he said. “One of them I spoke with today said basically ‘the Russian media is dead.'”
But some are still trying. And others, those who have fled, will need help setting up “newsrooms in exile,” Mahoney said. Independent journalists in Ukraine, meanwhile, urgently need protective gear and other supplies, he added. Watch the “A block” conversation with Mahoney, Ioffe and Friedman here…

The situation in Moscow

No major US- or UK-based network aired live reports from Moscow over the weekend. On Saturday Radio Free Europe/Radio Liberty, which is funded by the US, joined other news outlets in suspending its operations in the country, and said the new law was just one of the factors. More specifically, RFE/RL said, “local tax authorities initiated bankruptcy proceedings against RFE/RL’s Russian entity on March 4 and police intensified pressure on its journalists.”
“This is not a decision that RFE/RL has taken of its own accord, but one that has been forced upon us by the Putin regime’s assault on the truth,” RFE/RL CEO Jamie Fly said in a statement. Fly added: “Despite this bleak moment, we know from our organization’s 70-year history that one day, perhaps sooner than many think, we will be able to reopen a bureau in Russia. Time is on the side of liberty, even in Vladimir Putin’s Russia.”
>> Also notable: BBC World News, the broadcaster’s global TV news channel, has “been taken off air in Russia…”

The view from Ukraine

Monday’s UK front pages feature wrenching photos from Irpin, outside Kyiv, showing civilians running for their lives amid Russian shelling. CNN’s live updates page highlights another angle from inside the country: “Growing defiance on display in Russian-held Ukraine.”
“The last few days have seen growing popular defiance of Russian forces,” CNN’s Tim Lister and Olga Voitovych said, especially in the south of Ukraine, where there have been multiple protests in areas where Russian troops have arrived. More here…

Viewing the war through soda straws

During the invasion of Iraq in 2003, some embedded reporters observed that they were seeing the war through a soda straw, meaning one narrow slice of the story. These days, thanks to social media and cameraphones and other technologies, journalists have a whole handful of soda straws. But the point remains the same: Views of the battlefield are limited.
“One side, Russia, is opaque,” CNN’s Jim Sciutto told me from Lviv, Ukraine on Sunday. There are no journalists with Russian forces, and the officials “deliberately lie: They hide casualties, they hide equipment losses.”

“On the Ukrainian side, we have more vision,” Sciutto said, “because they’re sharing more images, but we also have to acknowledge they’re in the midst of an information war as well. Propaganda is part of fighting a war.” So Ukrainian officials accentuate the positives on their side and downplay the negatives.
“Then we have our people, particularly CNN, spread across the country,” he said, “often at great risk to themselves and their teams, who give you multiple soda straws,” multiple data points. The result: “Making a judgment as to where this conflict stands on any given day requires that humility,” Sciutto said, “because we don’t know the whole picture.” Ramishah Maruf has a recap of the segment here…
Source: Read Full Article