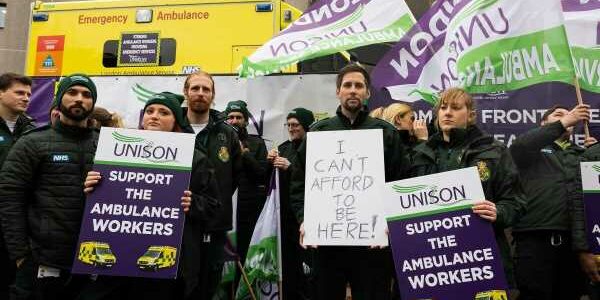 Patients brace for disruption as ambulance workers go on strike

Union leaders warned they will continue to stage walkouts for months to come unless the government agrees to put higher pay on the table. Mr Barclay said talks so far have been “constructive” and he is keen to discuss what is “affordable and fair”.

He said: “It is hugely disappointing some ambulance workers are continuing to take industrial action.

“While we have contingency plans in place to mitigate risks to patient safety, there will inevitably be further disruption.

“I have had constructive talks with unions about this coming year’s pay process for 2023/24, and am keen to continue talking about what is affordable and fair.”

Up to 15,000 Unison ambulance workers will strike for the third time in five weeks and will be joined by 5,000 of their NHS colleagues at two hospital trusts in Liverpool.

Porters, cleaners, nurses, midwives, healthcare assistants, theatre staff and other NHS workers at the Liverpool University Hospitals Trust and the city’s Heart and Chest Hospital will also be out on strike.

Prime Minister Rishi Sunak insisted he was “committed” to improve blue light services after strains on the ambulance service led to long delays for some patients even before strike action.

He told The Telegraph: “Everyone calling 999 deserves to feel confident they will get the urgent help they need.

“Our paramedics, ambulance drivers, police and firefighters do an incredible job keeping us safe, but each service has its unique challenges we must overcome to drive improvement for the public

“Blue light services that people can rely on are a fundamental aspect of our society, and I am committed to making them work better for everyone.”

She said: “The solution to the growing NHS crisis is staring the Government in the face. It’s simple, all the Chancellor needs to do is find the money to pay health workers fairly.

“The public wants the Government to end the dispute, and so do NHS staff, but most ministers look like they’d rather dig in and do nothing instead of boost pay and help turn the ailing NHS around.

“Higher wages would stop experienced employees leaving for better-paid jobs and encourage more people to come and work in the NHS.

“With more staff, ambulance response times would improve, and patient waits for treatment shorten. Everyone would be a winner.”

Ms McAnea said Chancellor Jeremy Hunt “pushed for fair pay” during his recent role as Health Select Committee chairman but has “chosen to forget all that” since entering the Treasury.

February 6 is likely to see the biggest strike action the NHS has ever experienced, with thousands of nurses and ambulance workers due to stage walkouts if no deal has been reached by then.

Unite general secretary Sharon Graham said a double-digit pay rise must be offered to striking NHS staff and described the Government as appearing willing to “talk about anything, but they won’t talk about pay”.

Ms Graham said the Government must “offer a double-digit pay rise instead of “dancing round their handbags”.

Almost 1,000 ambulance workers across the West Midlands in the GMB union will also strike, including paramedics and emergency care assistants.

NHS medical director Professor Sir Stephen Powis said: “As with other ambulance strikes, the message to patients remains that it is vital to come forward and seek emergency care if needed.

“This includes calling 999 for life-threatening emergencies as well as using 111 online for other health needs where you will receive clinical advice on the best next steps to take.

“People should also continue to use local services such as pharmacies and general practice as they normally would which aren’t impacted by strike action.”