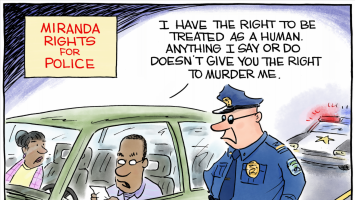 Police violence, Obamacare and other top Opinion reads this week

In today’s fast-paced news environment, it can be hard to keep up. For your weekend reading, we’ve started in-case-you-missed-it compilations of some of the week’s top USA TODAY Opinion pieces. As always, thanks for reading, and for your feedback.

“Listening to Hunter Biden’s unflinching account to CBS News of his darkest times — days and nights in a narrow world of craving the drugs that were stealing his life — left me admiring his honesty and his courage, but also flinching with the memories that huddle stubbornly in my own history. When I was barely 20, a doctor I had been getting amphetamines from, and frequently lying to in order to get refills way before I should have, suddenly got wise to me. He refused to refill the prescription, insisting instead that I let him do an electrocardiogram. After the test, he informed me that, if I continued my drug use, I wouldn’t live to 30.”

2. Reparations is not about cutting a check. It’s about repairing a community.

By Erika Alexander and Nina Turner

“Congress needs to stop selling Black people out to appease those who want to destroy us. Reparations isn’t about cutting Black people a check. It’s about cutting us a break. Our elected leaders should finally stand up to white supremacy and set the country on the path of truth, repair and racial reconciliation without delay. With H.R. 40, the opportunity is there. All they have to do is grab it.”

3. Prince Philip was the most interesting royal

“Millions of Americans are drawn to the English royals. But perhaps the wrong ones. The Meghan and Harry split with Buckingham Palace is like many other rifts between individuals and institutions. The Charles and Diana saga a generation before was a standard celebrity divorce, one involving people with titles rather than credits. There is one royal, however, whose story is better than tabloid fare, better even than fiction. His name is Philip, the Duke of Edinburgh and husband of the Queen, who died Friday.”

4. Caron Nazario case shows hate is an American disease, not just a white one

“With each new outrageous example of police misconduct, the calls to do something about the culture of policing get justifiably louder, but one of the primary tools reform advocates push could be ineffective: Diversifying police officers and leadership isn’t a silver bullet. The latest example comes from Windsor, Virginia, where two police officers pepper-sprayed and handcuffed a Black Latino Army lieutenant, Caron Nazario, after they pulled him over in December. Windsor is a small town near Hampton Roads, which has a significant military footprint.”

5. Corporations don’t like voter suppression, so McConnell wants them out of politics. Seriously?

“Senate Minority Leader Mitch McConnell has warned CEOs of large corporations to ‘stay out of politics,’ calling their engagement in divisive political issues ‘stupid.’ An ironic turn of events given the fact that Republicans are supposed to be the party that supports capitalism, free markets and free speech. What’s more, the GOP has been filling its campaign coffers with corporate donations for years and has even encouraged and publicly supported companies such as Hobby Lobby in their free speech efforts surrounding divisive political issues like birth control and LGBTQ rights. But when the tables turn and companies speak out against the Republican Party and legislation it backs, the hypocrisy is astounding.”

6. I’m an American citizen, essential worker and mother of two. Why was my husband deported?

“On Dec. 17, 2019, my husband, Rodner, and I went to our local Immigration and Customs Enforcement office with our attorney for a routine check-in, a requirement of his pending green card. About an hour later, my lawyer emerged and told me Rodner was being deported. He wasn’t allowed to say goodbye to me or our two children. We haven’t seen him since.”

“Under the shadow of former Minneapolis police officer Derek Chauvin’s trial – one of the highest-profile legal proceedings of our generation – another Black man has died just 10 miles  north of the city. He was shot by a Brooklyn Center police officer during a traffic stop Sunday. His name is Daunte Wright. He was 20 years old. Brooklyn Center Police Chief Tim Gannon said the officer mistakenly grabbed her firearm instead of her Taser. In a news conference Monday, Gannon characterized the shooting as an ‘accidental discharge.'”

8. Biden wants do big things. For America and history, he should get them done any way he can.

By Jill Lawrence and Gregg Zoroya

“Generations since have grown accustomed to Capitol Hill gridlock and nastiness. Failure to compromise has triggered 21 government shutdowns since 1976, the longest one for 35 days just two years ago. With few exceptions, the laws that do make it through are weak tea. According to the Pew Research Center, a full third of the bills in the last Congress were so-called ceremonial statutes commemorating coins or renaming post offices, the highest rate of insubstantial lawmaking in a decade.”

9. In face of more police violence, what happened to Biden pledge to have backs of Black America?

“On Sunday, 20-year-old Daunte Wright was killed by police in Brooklyn Center, Minnesota. This, as the trial of Derek Chauvin, the former Minneapolis officer who knelt on George Floyd’s neck in the city that is less than 15 miles from the latest shooting, casts an ominous shadow. In the past few weeks alone, the nation has been rocked by shocking reports of police violence. Adam Toledo, a Latino 13-year-old, was killed by Chicago police on March 29. Police video of the incident is slated to be released this week.”

10. Obamacare, for all its health insurance flaws, survives Trump, repeal, replace and COVID-19

By The Editorial Board

“‘Has anybody heard of Obamacare?’ Trump mocked at a campaign stop in September. Actually, that would be a most definitive yes — particularly for the 20 million Americans who have health insurance today thanks to the 11-year-old federal sponsored health insurance program that was a signature achievement of President Barack Obama. Either by expanding Medicaid enrollment or providing government discounts (tax credits) on health insurance plans, the law has been effective at reducing longstanding health coverage deficits among the poor and people of color.”

“The Affordable Care Act (ACA) was signed into law 11 years ago — an overhaul proponents argued would lower costs, expand access and improve quality by giving patients more choice. Sadly, it has failed to meet some of those laudable goals. Since the ACA’s passage, health care costs have skyrocketed as patient choices dwindle — a result of strangling doctors, hospitals, employers and insurance providers with government red tape. The Supreme Court determined that the individual mandate penalty, which forced Americans to purchase coverage that didn’t necessarily fit their unique circumstances, was unconstitutional.”

11. On Afghanistan, Biden decides a 20-year war is long enough and upsets all the right people

“Joe Biden wants to do what no American president this century has been able to do. On Wednesday, he announced his intention to withdraw all U.S. troops from Afghanistan by September 11, 2021, the 20th anniversary of the terror attack that sparked the longest war in this nation’s history. ‘We cannot continue the cycle of extending or expanding our military presence in Afghanistan hoping to create the ideal conditions for our withdrawal, expecting a different result,’ he said. This announcement demonstrates what have proven to be the two most promising aspects of Biden’s young presidency: the ability to learn from past mistakes, his own and others, and a willingness to trigger the right people.”

“More than a dozen states have proposed or instituted bans on transgender athletes. Mississippi calls its version “the Mississippi Fairness Act,” offering up the popular concern that trans female athletes have an unfair advantage over other female athletes and that their presence would violate the competitive equity that is the very reason for separate girls’ and boys’ sports and women’s and men’s sports. Such fears, in and of themselves, are not bigotry. But they do reflect a sadly limited understanding of high school sports and high school athletes.”

You can read diverse opinions from our Board of Contributors and other writers on the Opinion front page, on Twitter @usatodayopinion and in our daily Opinion newsletter. To respond to a column, submit a comment to [email protected]