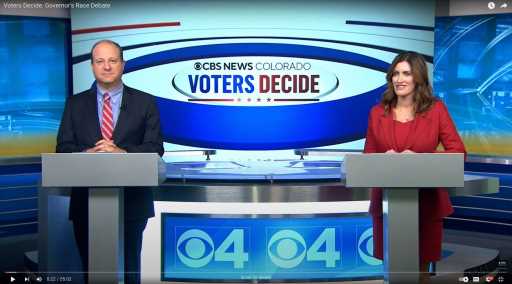 Thursday night’s debate between Gov. Jared Polis and CU Regent Heidi Ganahl could be summarized in one brief exchange.

As Ganahl criticized Polis’s environmental policy, the governor interjected: “Her answer to every question is ‘Jared Polis, Jared Polis.’”

“It is,” Ganahl retorted. “Polis is the problem.”

Fewer than four weeks remain until Election Day, and the first televised debate between the pair was a rapid-fire, often combative affair. They clashed over drugs, inflation, housing policy, abortion, the Marshall fire and more over the course of the night, which was joint-hosted by CBS4 and the Colorado Sun.

As has been the case throughout the campaign, Polis defended his record and pledged to address the systemic problems facing the state, while Ganahl hammered his handling of crime and inflation in particular. Here are some of the other key differences highlighted Thursday.

Asked if he would support an effort to end a constitutional ban on using state funds for abortion services, Polis was noncommital and said he’d have to read any potential initiative first to make sure it didn’t have “unintended consequences.” But he reaffirmed his broader pro-abortion rights beliefs.

Ganahl, asked if she would sign a bill limiting abortion if it came across her desk as governor, said she thought it should be a question for voters. She pledged to not make “substantive changes” to abortion laws in the state without seeking to have it decided on the ballot.

Polis has stressed his efforts to curb fees and to push for tax refund checks early over the past year. Though moderators noted several of those maneuvers are temporary, he again touted various savings Thursday night as efforts to help stave off the worst effects of inflation.

He said he wanted to find ways to permanently constrain the growth of property taxes and that he supported lowering and even “trying to abolish” the income tax, as Ganahl has pledged to do. But he criticized her plan and said it would slash funding for schools, law enforcement and state government generally. He has said he would support replacing the income tax with other revenue-raisers for the state.

Ganahl maintained that a hiring freeze, the use of TABOR money, eliminating tax exemptions and the reversion of fees to taxes — via voter approval — made her plan feasible and that Polis’s efforts to grow state government had negatively impacted the state.

Ganahl — like Republican candidates across the state — repeatedly hit on Colorado’s overdose crisis, one that dovetails with a national trend and a broader shift in the drug supply, and laid it at Polis’s feet. In her opening statement, she claimed that the state was “No. 2 in fentanyl deaths” nationally, and at one point, Ganahl asked Polis to apologize to parents whose children have died after ingesting the drug.

Polis, who signed a bipartisan 2019 bill that made it a misdemeanor to possess 4 grams or fewer of several substances, including fentanyl, noted that Colorado’s death rate isn’t the second-worst in the country (data from the Centers for Disease Control and Prevention indicate Colorado is in the middle of the pack for death rates nationally). Polis noted his support for new criminal penalties for pill presses and tighter sentences for dealers.

The exchange grew testy, with both candidates talking over each other.

“Tell the parents who lost their children to fentanyl why you signed that bill,” Ganahl said.

“Exactly, that’s why you shouldn’t be going around misleading people that we’re the top,” he shot back. “It’s tragic enough.”

Like with fentanyl, Ganahl and the GOP have hammered Polis and the Democrats on Colorado’s crime levels for months. Ganahl did so again Thursday, pledging to clean house and replace the state’s parole board and the heads of multiple state departments. She also said she’d push for tighter penalties for various criminal offenses, including possession of fentanyl.

“Public safety will be my number one priority,” she said.

Polis, who has repeatedly touted his pledge to make Colorado a top-10 safest state, said it wasn’t a “political, conservative, liberal discussion; it should be a data-driven discussion.” He noted that the money had been set aside to hire and retain law enforcement, and he said he was open to tighter penalties.

“You show me that a penalty here increases safety and decreases crime, we’re for it,” he said. “It makes us less safe? I’m against it.”

Housing affordability remains a top priority for Coloradans, as the market cools and rents increase. Polis expressed support for “modular, pre-fab homes” — those built in factories, rather than on-site — which had previously been given a boost via legislation he signed in May.

Polis interjected to ask her what he had done to make housing more expensive, noting that zoning and other control measures were handled by local authorities. Ganahl said she had friends in Superior whose homes were lost to the Marshall Fire, and she blame Polis’s “Green New Deal” policies for making their rebuilds more expensive. Residents rebuilding after the fire had chafed at local policies around homebuilding earlier this year.

Ganahl garnered scrutiny earlier this month for repeatedly claiming that students across Colorado were identifying as cats and that schools were “tolerating” it. School districts rebuked that notion, and Polis brought up the claim repeatedly Thursday. He accused Ganahl of suggesting schools were using litter boxes, too, a falsehood repeated elsewhere but not by Ganahl (she interjected to say that “was not true”).

He asked Ganahl directly how she would be a “reality-based governor,” given the cat claims and that her running mate, Danny Moore, had called the 2020 election “the great steal.”

Ganahl, who sidestepped the cat-conspiracy jab, said she spoke to parents and voters across the state and heard their concerns. She then accused Polis of acting like a “spoiled brat” when he speaks with constituents.

Ganahl has repeatedly linked the kids-are-identifying-as-cats story to educational performance. She’s said the behavior — which districts say isn’t an issue they deal with — is a distraction, and she’s linked that to test scores showing students struggling to read at grade level.

On Thursday, she called for better teacher pay, increased “school choice” — a call out to charter schools — and cuts to administrative positions. She advocated for increased transparency at a state level for curriculum.

Polis touted the passage of universal preschool and early childhood education, and he indicated he supported local control of curriculum and schools in general. He said Ganahl’s plans were great — if she were running for school board.