Home » Politics » POLL: Do you blame Brexit for the cost of living crisis? VOTE HERE 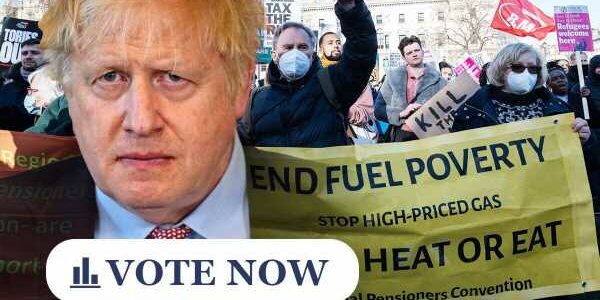 POLL: Do you blame Brexit for the cost of living crisis? VOTE HERE

Brexit to save Johnson ahead of likely no-confidence vote

UK inflation has hit an unprecedented high of 9 percent as the impact of both the pandemic and the war in Ukraine drive the costs of necessary goods higher every day. The West’s response to Russia’s aggression with the financial sanctions has also left many British people unable to cope with the skyrocketing energy bills as the costs are passed to consumers.

Critic voices of Brexit coming from the opposition but also from within Boris Johnson’s Government suggest that the UK leaving the European Union also plays its role in the worsening of the crisis in Britain.

Senior Tory MP Tobias Ellwood has blamed Brexit for the cost of living crisis, claiming that it has sparked a number of challenges as it is “not what most people imagined”.

Mr Ellwood argued that Britain should rejoin the EU’s single market in order to surpass these challenges and ease the crisis, provoking intense criticism by fellow MPs.

The MP for Bournemouth East claimed there is an “appetite” to make “course corrections” to Brexit.

Mr Ellwood wrote inThe House magazine: “Let’s not forget, both Winston Churchill and Margaret Thatcher endorsed this model, with the view that the potential economic benefits outweigh the drawbacks.

“If joining the single market (with conditions) results in strengthening our economy, easing the cost-of-living crisis, settling the Irish problem at a stroke and promoting our European credentials as we take an ever greater lead in Ukraine, would it not be churlish to face this reality?”

He told Times Radio on Thursday: “Joining that single market, I believe, would strengthen our economy because it would remove so much red tape, it would ease the cost-of-living crisis, it would actually settle the difficult Irish problem on the Northern Ireland Protocol… and finally, it’s also to do with boosting our European credentials.

“Because we are now taking a lead in Europe on Ukraine, but the fact that this Brexit issue – particularly on Northern Ireland – is unresolved means, you know, we’re pulled back on this.”

Echoing these observations, a leading wine wholesaler from Wales claimed Brexit has caused a “huge disruption” to his business.

Daniel Lambert warned that, since Brexit was implemented, costs for both retail and wholesale trade, and especially for imports, have climbed at the expense of consumers.

He calculated the additional charges required to trade that occurred over the past 18 months and found that each bottle of wine is more expensive by £1.50.

Meanwhile, the latest YouGov survey asked respondents whether they thought Britain was right or wrong to leave the EU.

Responders who believed Brexit was wrong outnumbered those that say it was the right decision by 12 points, with 49 over 37 percent.

Meanwhile, the CEO of Citigroup, Jane Fraser, predicted that the whole of Europe is expected to fall in a devastating recession, as citizens could struggle cover basic living costs such as heating this winter.