Home » Politics » Polls indicate infrastructure bill is popular, but Biden and Democrats don’t get any bounce

Polls indicate infrastructure bill is popular, but Biden and Democrats don’t get any bounce

President Biden says the bipartisan infrastructure bill, which he signed into law on Monday, will help families struggling economically amid the highest surge in inflation in three decades.

“Today we’re finally getting this done,” the president declared at White House bill signing ceremony. “My message to the American people is this: America is moving again, and your life is going to change for the better.”

Public opinion polls indicate that the $1.2 trillion package – the largest investment in the nation’s crumbling roads and bridges in decades – is getting a thumbs up from a majority of Americans.

But so far the bill – which passed the Senate over the summer and the House earlier this month – is not helping Biden boost his flagging poll numbers or aiding congressional Democrats hoping to retain the razor thin majorities in next year’s midterm elections. 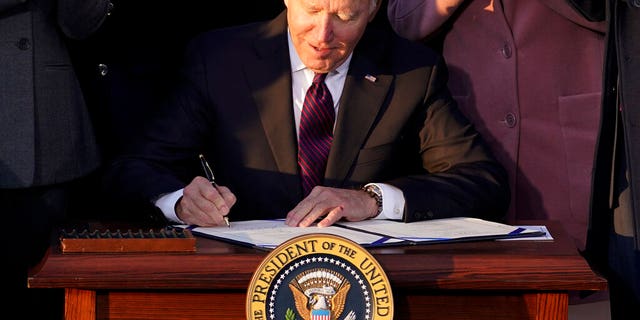 President Joe Biden signs the "Infrastructure Investment and Jobs Act" during an event on the South Lawn of the White House, Monday, Nov. 15, 2021, in Washington. (AP Photo/Evan Vucci)
(AP )

The package – which includes more than $500 billion in new spending for “core” infrastructure projects such as transportation, broadband internet and electric utilities over the next eight years – is backed by 63% of Americans in an ABC News/Washington Post national poll conducted Nov. 7-10, after the final passage of the measure.

That support’s in-line with a USA Today/Suffolk University survey conducted in late August and a Quinnipiac University poll conducted in early October. But all three surveys indicate a partisan divide, with the vast majority of Democrats and a solid number of independents backing the bill, and most Republicans opposed.

The president’s signing of the infrastructure bill comes as congressional Democrats are struggling to pass a roughly $1.75 million social spending and climate change measure, which the ABC News/Washington Post survey indicates is supported by 58% of Americans.

The problem for the president and his party – the bills are much more popular than they are.

Biden’s approval rating in the new survey stands at 41%, with disapproval at 53%. But it’s more than just one poll – the president stands at 42% approval and 53% disapproval in an average of all of the latest surveys that was compiled by Real Clear Politics.

And Republicans hold a 51%-41% advantage over the Democrats in the ABC News/Washington Post poll in the generic ballot, which asks if respondents will support an unnamed Democrat or Republican in their congressional district in the next election. That’s the GOP’s largest lead in midterm election voting preferences in ABC News/Washington Post polling dating back four decades.

The numbers in the new survey indicate a weakening in support for the president and his party among suburbanites and college educated White voters, two groups that helped fuel the 2018 blue wave in which the Democrats convincingly won back the House, and Biden’s 2020 election victory over then-President Trump.

The Democratic Congressional Campaign Committee (DCCC), the House Democrats reelection arm, points to the signing into law of the infrastructure bill and the expected passage of the larger spending bill as major selling points in their bid to retain the House majority.

“One year from Election Day 2022, our key to victory is clear: President Biden and House Democrats are delivering on their hopeful, unified vision for America’s families, stabilizing the U.S. economy and making robust investments in our future,” a DCCC memo released on Monday spotlighted.

But signature legislation doesn’t have a proven track record in helping the president’s party keep control of Congress.

The Affordable Care Act, better known as Obamacare, and the Dodd-Frank Wall Street Reform and Consumer Protection Acts of 2010  – the landmark legislative achievements of then-President Barack Obama’s first two years in office – didn’t save the Democrats from getting annihilated by a Tea Party fueled red wave in that year’s midterm elections.

And Trump’s major domestic achievement during his first two years in office – the Tax Cuts and Jobs Act of 2017 – didn’t prevent the Democrats from convincingly winning back the House the following year.

“Any strategy based on a signature piece of legislation more often than not does not work,” veteran political scientist Wayne Lesperance noted. “There’s something about the American electorate in midterms where it’s an opportunity for voters to sort of keep the party in power in check. That’s the norm. Signature pieces of legislation rarely provide a buffer against that instinct from the voters.”

Lesperance, the vice president of academic affairs at New England College, emphasized that “what the American people appear to be really focused on is their everyday expenses, their kitchen table issues – how much does it cost to put food on the table and fill up your car with gas.”

And he said that the “challenge that the Biden administration and the Democrats have is making showing how this legislation is going to make peoples’ lives more affordable. And that’s not obvious.”

The president begins that effort in earnest on Tuesday – as he travels to Woodstock, New Hampshire, to tout the benefits of the infrastructure package.