Home » Politics » Postmaster General DeJoy is under investigation by the Justice Department, his spokesman says. 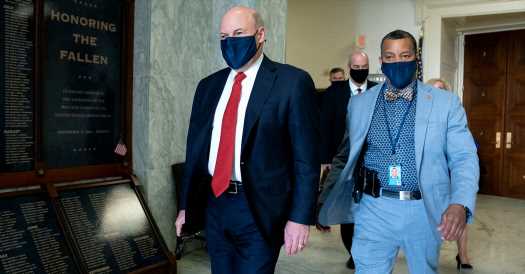 Postmaster General DeJoy is under investigation by the Justice Department, his spokesman says.

The Justice Department is investigating Postmaster General Louis DeJoy over potential campaign fund-raising crimes when he was still in the private sector, according to his spokesman, who said that Mr. DeJoy is cooperating with investigators.

The investigation focuses on campaign contributions made by people employed by New Breed Logistics, the North Carolina-based company that Mr. DeJoy led before he was appointed postmaster general last year. Mr. DeJoy was a leading fund-raiser for Republicans and President Donald J. Trump.

“Mr. DeJoy has learned that the Department of Justice is investigating campaign contributions made by employees who worked for him when he was in the private sector,” said Mark Corallo, a spokesman for Mr. DeJoy.

“He has always been scrupulous in his adherence to the campaign contribution laws and has never knowingly violated them,” Mr. Corallo said.

The Washington Post, which earlier reported the existence of the federal investigation into Mr. DeJoy, reported last year that some New Breed Logistics employees felt that Mr. DeJoy and others close to him had pressured them to contribute to Republican candidates, and that the company used bonuses to repay employees for making those contributions.

It is a violation of campaign finance law for an individual or company to work around political contribution limits by essentially making additional donations under another party’s name.

The investigation into Mr. DeJoy is politically charged, and the Biden administration has been keen to see newly elected members of the United States Postal Service board remove Mr. DeJoy from his position. (The Postal Service’s board of governors, who are appointed by the president, choose the postmaster general for an indefinite term.)

Soon after becoming postmaster general last June, Mr. DeJoy made a raft of changes to the Postal Service that critics said made it harder for people to vote by mail amid a global pandemic that had forced most Americans to shelter at home.

He eliminated employee overtime, removed mail-sorting machines from postal facilities and reorganized top leaders, changes that slowed mail service and raised concerns that the Postal Service would not be able to handle the high volumes of mail-in ballots that were expected to be cast in the November election.

Mr. DeJoy argued that the changes were intended to make the Postal Service financially stable, but after a flurry of litigation, Mr. DeJoy postponed some of those decisions.

At a hearing in February before a House oversight hearing on the post office’s service and financial problems, Mr. DeJoy apologized for the Postal Service’s slow delivery times during the 2020 holiday season and vowed to make systemic improvements.