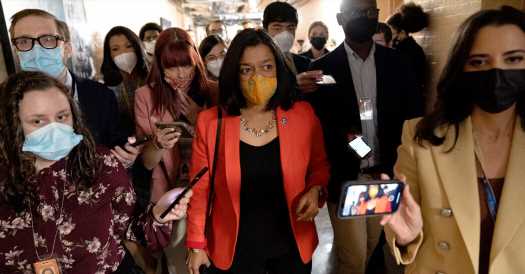 Liberals rejected demands from moderate Democrats to shrink President Biden’s domestic policy agenda by more than half, though they said they were willing to compromise. 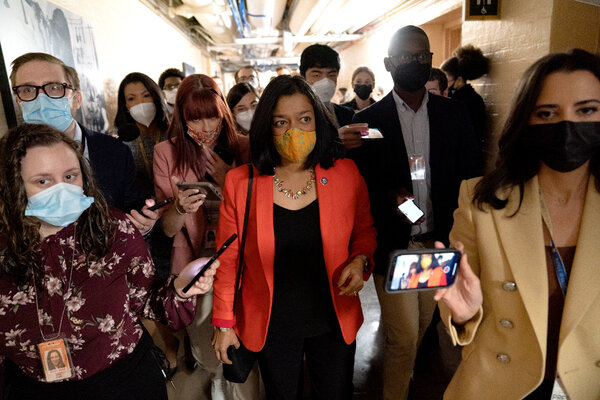 By Luke Broadwater and Chris Cameron

After a tumultuous week in Congress, during which deep divisions in the Democratic Party delayed progress on part of President Biden’s economic agenda, debate spilled over into the weekend as the party braced for intense negotiations in the weeks ahead.

Progressives on Sunday flatly rejected the latest demands from Senator Joe Manchin III of West Virginia, a key swing vote for Democrats, to shrink President Biden’s domestic policy agenda by more than half and to insert a provision to ensure that the federal government does not fund abortions.

Representative Pramila Jayapal, Democrat of Washington and the chairwoman of the Congressional Progressive Caucus, said that progressives would not agree to reduce Mr. Biden’s 10-year, $3.5 trillion social safety net and climate bill to $1.5 trillion, as Mr. Manchin requested.

“That’s not going to happen,” Ms. Jayapal said on “State of the Union” on CNN. “That’s too small to get our priorities in. It’s going to be somewhere between $1.5 and $3.5, and I think the White House is working on that right now. Remember: What we want to deliver is child care, paid leave, climate change.”

Mr. Manchin said in an interview with National Review last week that he was insisting that the legislation include the Hyde Amendment, which states that Medicaid will not pay for an abortion unless the woman’s life is in danger or the pregnancy resulted from rape or incest.

The Hyde Amendment has been reauthorized every year since 1976, but Mr. Biden did not include it in his latest budget proposal. During the presidential race, his campaign initially said he supported the amendment, but he later reversed course and condemned it.

Ms. Jayapal, who was one of three members of Congress who testified last week about their personal experiences of having an abortion, said she opposed Mr. Manchin’s demand.