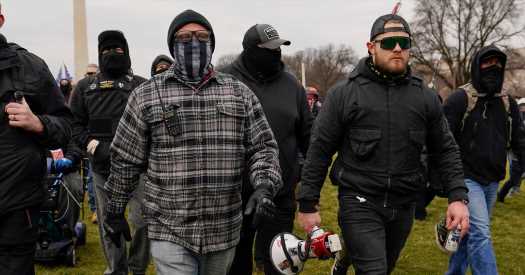 WASHINGTON — F.B.I. agents have arrested two organizers for the Proud Boys in Philadelphia and North Carolina, and prosecutors filed new charges against two other prominent members of the far-right group in Florida and Washington State as federal authorities continued their crackdown on its leadership ranks, three law enforcement officials said on Wednesday.

With the new conspiracy indictment, prosecutors have now brought charges against a total of 13 people identified in court papers as members of the Proud Boys. Federal investigators have described the group, which appeared in force in Washington on Jan. 6, as one of the chief instigators of the riot at the Capitol that left five people dead, including a Capitol Police officer.

In the indictment, prosecutors accused Charles Donohoe, a Proud Boys leader from North Carolina, and Zach Rehl, the president of the group’s chapter in Philadelphia, of conspiring to interfere with law enforcement officers at the Capitol and obstruct the certification of President Biden’s electoral victory. Two other high-ranking Proud Boys who were already facing similar charges — Ethan Nordean of Auburn, Wash., and Joseph Biggs of Ormond Beach, Fla. — were also implicated as part of the conspiracy.

The Proud Boys, who emerged in recent years as some of former President Donald J. Trump’s most vocal and violent supporters, describe themselves as “Western chauvinists” and have a history of bloody street fights with left-wing antifascist activists. Those clashes intensified last year during the nationwide protests stemming from the death of George Floyd at the hands of the police in Minneapolis. During a presidential debate in September, Mr. Trump refused to disavow the Proud Boys, telling them instead in a widely watched moment to “stand back and stand by.”

While the Proud Boys had largely managed to avoid federal scrutiny, that changed after the Jan. 6 riot. The F.B.I. began aggressively investigating members of the group involved in the attack on the Capitol. Agents have searched homes across the country, scoured social media accounts and delved into the private communications of Proud Boys leaders. Members of the group have been charged in four conspiracy cases, accused of crimes including threatening a federal officer and the destruction of government property.

The new conspiracy case was the latest product of the efforts to prosecute the Proud Boys. Investigators have said that Mr. Biggs, 37, and Mr. Nordean, 30, equipped with radios and a bullhorn, led a mob of about 100 members and supporters of the group that marched through the streets of Washington on Jan. 6 chanting slogans and ultimately breached security barriers at the Capitol. Some Proud Boys were among the first rioters to shatter windows and enter the building, confronting police officers inside.

Mr. Biggs, a former Army sergeant, was released from custody pending trial shortly after his arrest in January, and his case has been in a kind of legal holding pattern for weeks. Mr. Nordean was released from custody on March 3 after the chief judge of the Federal District Court in Washington agreed with his lawyers that the evidence that he was responsible for aiding and abetting the violence and property destruction committed by his fellow Proud Boys at the Capitol was — at least at that point — relatively weak.

Mr. Rehl, 35, has styled himself as one of the Proud Boys’ most prominent representatives on the East Coast and has led the group’s Philadelphia chapter since at least 2018, according to federal law enforcement officials. This summer, he and other Proud Boys were spotted socializing with local police officers outside a Philadelphia police union lodge.