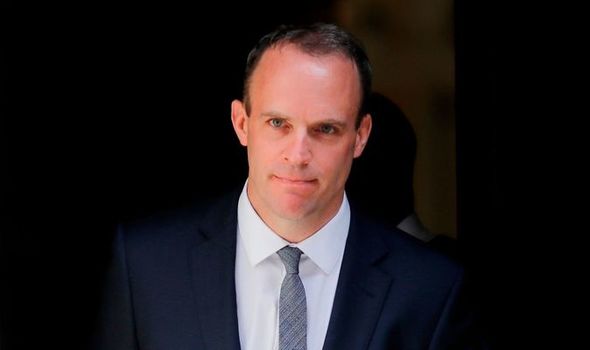 The Sunday Express has learnt that the Justice Secretary has had direct discussions with the rightwing Common Sense Group over his plans to overhaul the Human Rights Act.

The talks have come after Mr Raab launched his consultation into reforming the Human Rights Act.

It follows Attorney General Suella Braverman, a supporter of scrapping human rights legislation, briefing the cabinet over her concerns that judges are now putting “much greater weight” on international agreements like the European Convention of Human Rights (ECHR) and Refugee Convention than laws passed by Parliament.

In recent months Poland has been in dispute with the European Union over a law it passed that made its domestic law take priority over foreign agreements including its membership of the EU.

Conservative MPs in the Common Sense Group want a similar law passed in the UK to help tackle the problem of leftwing activist lawyers using the ECHR from preventing deportations of foreign criminals and the Government bringing in tough measures to stop the illegal migrants coming across the Channel on small boats.

The talks have also focussed on the “abuse” of articles 3, protection against torture, 8, the right to a family life, and 12, the right to start a family, which one MP said “have turned into loopholes to prevent tough immigration controls.”

A member of the group said: “When we spoke to him Dominic Raab was definitely on side with our ideas for reform.

“He underlined though that this needed to be about fairness and justice, for example not giving the violent criminal the same rights as his victim.

“But he also said that he will need to bring the wets in the party who want to keep the Human Rights Act on side if we are to get reform through.”

Former security minister Sir John Hayes, chairman and founder of the Common Sense, said: “It is really good that we have a Government taking this issue seriously and we have a Justice Secretary, Attorney General and Home Secretary who recognise that the status quo with the human rights legislation cannot continue.

“We now need the Government to complete its consultation and bring forward legislation reforming the Human Rights Act before the summer.”