Republicans Have Emerged From The Capitol Insurrection United Against Democracy

Seven Republican members of the U.S. Senate voted to find former President Donald Trump guilty of inciting the Jan. 6 insurrection at the U.S. Capitol that left five people dead. By the end of this week, six of the seven may have faced censures from local and state Republican parties back home because of those votes.

Together with the 10 Republican House members who voted to impeach Trump, the seven GOP senators made Trump’s second impeachment the most bipartisan in American history. But if those votes foreshadowed a looming civil war within the GOP, the hasty efforts to censure anyone who crossed Trump are a good indication of which side has the larger army.

As the riot in the Capitol played out, even the GOP lawmakers who helped incite it briefly attempted to distance themselves from the mess they had created. But rather than a reckoning, the Republican Party is attempting a purge. From Congress to state legislatures, and in the state- and county-level parties that make up its base, the GOP’s rank and file has emerged from an insurrection and a second impeachment trial united against American democracy and the few members of the party still willing to stand up for it.

The North Carolina GOP voted Monday to censure Sen. Richard Burr, two days after the Louisiana Republican Party censured Sen. Bill Cassidy. Local Republican parties in Alaska also passed resolutions to censure Sen. Lisa Murkowski, and the Pennsylvania GOP is planning a possible censure of Sen. Pat Toomey after at least one county party already voted to do so. State party leaders in Maine are at least discussing a censure for Sen. Susan Collins. Nebraska Sen. Ben Sasse, who earned censures from multiple county parties earlier this month after blaming Trump for the Capitol riot, could soon face a statewide censure effort, CNBC reported this week. Some Utah Republicans circulated a petition to censure Sen. Mitt Romney over his vote, but the state GOP announced Monday that it would not move forward with the effort.

There is little question that Trump incited the riot. His peddling of conspiracy theories led to the protests that set the stage for them, and many of the rioters have since admitted that they rallied outside the Capitol, and later entered it, because they believed that’s what Trump had told them to do at a rally earlier that day. Trump sent a tweet attacking Vice President Mike Pence just minutes after learning that Pence’s life was in danger inside the building, and mocked House GOP leader Kevin McCarthy over the phone as McCarthy begged him to call off the rioters. 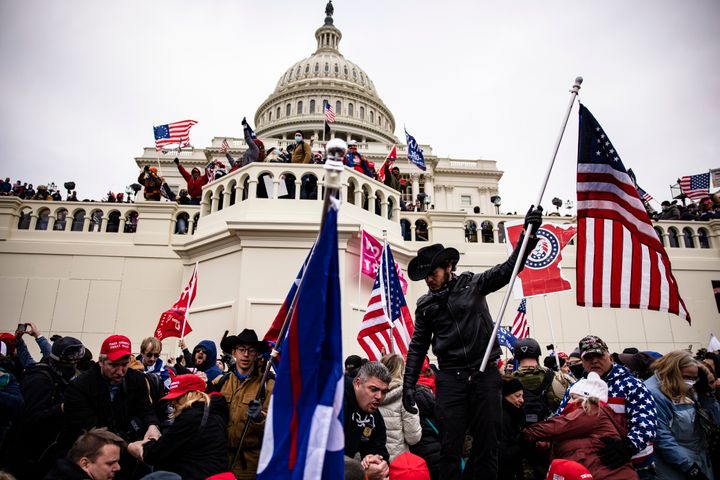 But Republicans pushing the censure resolutions have made it clear that nothing that happened at the Capitol, and no amount of evidence linking Trump to it, could have justified a vote to convict him.

Just hours after police finally cleared the Capitol of the rioters who attempted to lay waste to it, 147 Republicans voted to overturn presidential election results in the House and the Senate. Their cues came not just from the president who incited the riots but from outside the building too, where at least 57 Republicans who hold office at the state and local level participated in the protests that turned into an insurrection on Trump’s orders, according to a HuffPost review of attendees.

A week later, the House voted to impeach Trump for a second time, but 197 Republicans rejected the move and instead blamed Democrats for riots Trump inflamed. The few GOP lawmakers who supported impeachment faced immediate backlash: The Wyoming GOP immediately censured Rep. Liz Cheney ― a member of House GOP leadership ― and in Illinois, at least two county Republican parties rebuked Rep. Adam Kinzinger, who supported both impeachment and Democrats’ stripping of Georgia Rep. Marjorie Taylor Greene’s committee assignments over her support for QAnon and other conspiracy theories.

In late January, the Arizona Republican Party censured Gov. Doug Ducey for his refusal to fully go along with Trump’s conspiracy theory-driven crusade to overturn the state’s election results. 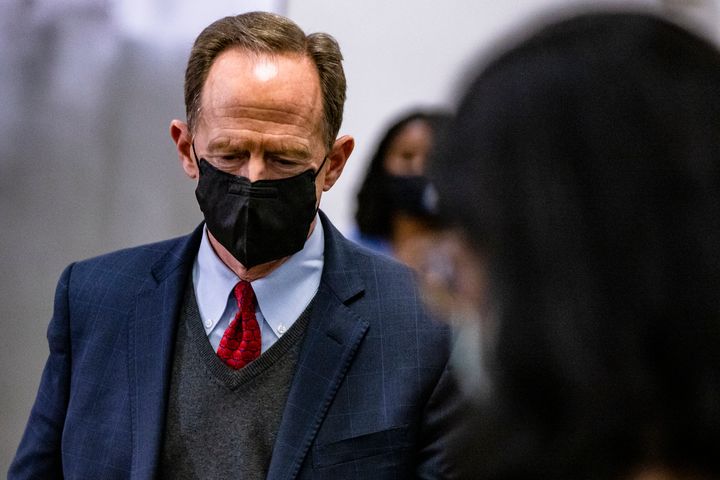 The censures have no binding effect. But they have already had a clear radicalizing effect on the party’s members. In early February, Michigan state Senate Majority Leader Mike Shirkey attempted to thwart an attempt to censure him by bowing to the conspiracies that drove the Capitol riots. The insurrection, Shirkey told county GOP officials who were weighing a censure effort, was “a hoax” staged by rioters who weren’t “Trump people.”

The Republican Party of Kentucky blocked a radical effort to censure Senate GOP leader Mitch McConnell after he blamed Trump for provoking the Capitol riot. But afterward, McConnell nevertheless did everything he could to help Trump escape accountability, first by delaying the Senate trial in order to lend credence to claims that impeachment of a former president was unconstitutional, and then by toeing the party line when it came time to reach a verdict.

If McConnell and other Republicans are engaged in a struggle for the soul of a party they helped bring to this point, as some of their allies and supporters insist they are, they don’t appear particularly close to winning it.

Toomey, once a darling of the Tea Party movement who helped drive former Sen. Arlen Specter to defect from the GOP to the Democratic majority in 2009, is no longer radical enough for the party’s base. He chose to retire instead of seeking reelection in 2022, a move that will almost surely clear the way for GOP primary voters to select a candidate from the Trumpist wing of the party that has already steered Pennsylvania Republicans further toward the right-wing extreme. Burr, too, decided to retire, opening a path for Lara Trump, the former president’s daughter-in-law, to potentially run in North Carolina.

Ducey, who is among the most conservative governors in the nation, is term-limited and cannot seek reelection in 2022. That will open the door for the Arizona GOP, which has made its full devotion to Trump clear under party chairwoman Kelli Ward, to move even further right if other Republican officials can’t wrestle control of the party from Ward first. 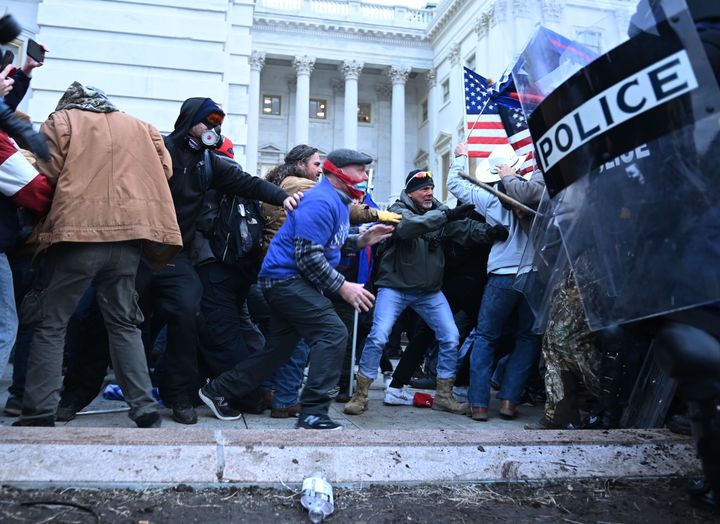 Cassidy, Collins and Sasse all began new six-year terms in January, and Romney does not face reelection until 2024. None may be particularly vulnerable to ouster, but neither are they representative of the party they inhabit. Aside from Murkowski, Senate Republicans who face reelection next year have continued to defend Trump and stoke the conspiracies that fueled the riots.

Kentucky Sen. Rand Paul, who is on the ballot next year, last week likened the Capitol riot to the protests that took place in Louisville this summer after the police killing of Breonna Taylor, and has continued to baselessly assert that rampant fraud took place in the 2020 elections.

South Carolina Sen. Tim Scott said this week that Trump was “the one person I don’t blame” for what took place in Washington. And Wisconsin Sen. Ron Johnson, who is more vulnerable to a Democratic challenge in 2022 than either Paul or Scott, went on conservative talk radio this week to dismiss the idea that the insurrection had been violent, or an insurrection at all.

“This didn’t seem like an armed insurrection to me,” Johnson said on WISN radio. “I mean ‘armed,’ when you hear ‘armed,’ don’t you think of firearms?” (A review of court records related to the riots found that participants came armed with rifles, handguns, a “shit ton” of ammunition and Molotov cocktails. “The bloodshed could have easily been worse,” one gun control activist told HuffPost afterward.)

Republican state legislatures, which incubated GOP radicalism before Trump and are continuing to advance his anti-democratic movement now that he’s gone, are waging an all-out effort to roll back voting rights, overhaul electoral systems and erode democratic institutions, especially in the swing states that carried President Joe Biden to victory. And since the riots, tens of thousands of Republican voters have fled the GOP, leaving behind a base of true believers who will only intensify the party’s opposition to democracy.