The contests are close in Arizona, Georgia, Nevada and Pennsylvania. Many voters want Republicans to flip the Senate, but prefer the Democrat in their state.

Send any friend a story

As a subscriber, you have 10 gift articles to give each month. Anyone can read what you share. 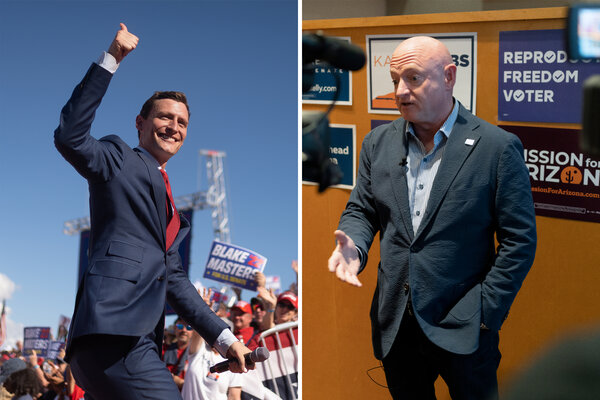 By Lisa Lerer and Ruth Igielnik

Control of the Senate rests on a knife’s edge, according to new polls by The New York Times and Siena College, with Republican challengers in Nevada and Georgia neck-and-neck with Democratic incumbents, and the Democratic candidate in Pennsylvania clinging to what appears to be a tenuous advantage.

The bright spot for Democrats in the four key states polled was in Arizona, where Senator Mark Kelly is holding a small but steady lead over his Republican challenger, Blake Masters.

The results indicate a deeply volatile and unpredictable Senate contest: More people across three of the states surveyed said they wanted Republicans to gain control of the Senate, but they preferred the individual Democratic candidates in their states — a sign that Republicans may be hampered by the shortcomings of their nominees.

Midterm elections are typically referendums on the party in power, and Democrats must defy decades of that political history to win control of the Senate, an outcome that has not completely slipped out of the party’s grasp according to the findings of the Times/Siena surveys. Democrats control the 50-50 Senate with Vice President Kamala Harris as the tiebreaking vote. To gain the majority, Republicans need to gain just one seat.

If this November’s election for U.S. Senate were held today, which candidate would you be more likely to vote for?