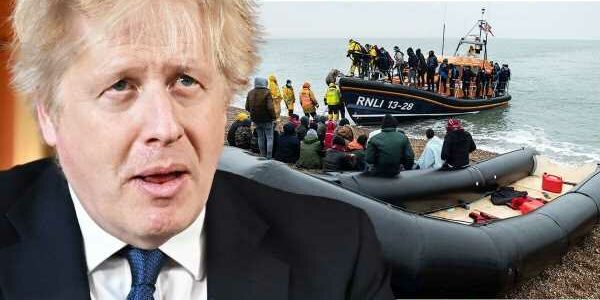 Widdecombe says 'We cannot have interference' from ECHR

The Bow Group, Britain’s oldest conservative think tank, said this would help tighten the country’s judicial system, rather than leave it exposed. Its Chairman, Ben Harris-Quinney, added this could take the UK a step closer to achieving a proper Brexit.

The number due to be transported on the flight had already been whittled down from 37 to seven but the court which holds up the ECHR granted an urgent interim measure for one of the migrants, an Iraqi national, preventing his removal at this time.

This is understood to have provided grounds for the remaining people to appeal for their removal orders to be scrapped.

Ministers described the decision as “very surprising” but suggested work was underway for a second (or, rather, the first) flight out of the UK.

The Bow Group stressed that in order to ensure this isn’t also stopped by last-minute rulings from the Continent, and to shore up the UK’s judicial system, Boris Johnson should exit the UK from the ECHR.

It argued the Government elected on the back of the promise to “get Brexit done” should begin the process of transitioning to a “fully independent judicial system immediately” through the creation of a new bill of rights, alongside the 1689 act.

Mr Harris-Quinney said: “While the ECHR has never been part of the EU, when the people voted for Brexit they voted to return all powers of governance to our shores.”

It also voted, he stressed, to “dramatically cut immigration”. The Bow Group has, as such, also called on ministers to publish a new immigration strategy “following two decades of unrestrained mass immigration against public wishes”.

READ MORE: Voters ‘fed up’ with waiting for politician whose fit to lead

The Rwanda plan alone, the group’s Chairman added, “was never going to come close to dealing with the estimated 1.6 million people that enter the country legally and hundreds of thousands that enter illegally”.

He also noted: “However, if the Government can’t even remove seven people, they are never going to be able to deal with the full scale of the problem.”

Dr Jon Stanley, Senior Research Fellow at the think tank, added those who oppose the plan “offer no moral alternative”.

Their default policy, he said, “is tantamount to a medieval trial by water, whereby cases are deemed worth of staying in Britain without merit beyond risking drowning in their attempt to commit their first act on British soil, a criminal act”.

DON’T MISS:
Hated Brexit deal ‘could shatter UK’ [OPINION]
Farage blasts those blaming conflict in Ukraine for inflation [NEWS]
Britons blast Tories and Labour who are ‘as bad as each other’ [OPINION]

Dr Stanley stressed the Government, with its 80 seat majority in the House of Commons, “must” get on with removing the UK from the reach of the Strasbourg court.

Some of those opposed to this course of action have suggested Britons, their country out of the ECHR, would possess fewer rights.

Jessica Simor QC wrote in a post on Twitter: “Even trying to pull out the Convention of Human Rights – even talking about – suggests to the World that Britain is no longer stable. That has repercussions, some of which we can predict, many of which we cannot.”

Mr Harris-Quinney, however, argued the withdrawal and subsequent laying down of new protections would, in fact, improve the position of Britons.

He told Express.co.uk: “There is not just the opportunity to solve the immigration issue but also drastically improve British citizen’s rights, and strengthen and make absolute principles like freedom of speech, as they have in the United States.”

Downing Street earlier today confirmed that the Prime Minister is considering withdrawing from the treaty.

Mr Johnson also yesterday said this course of action “may very well” soon be necessary in order to allow future deportations to go ahead.