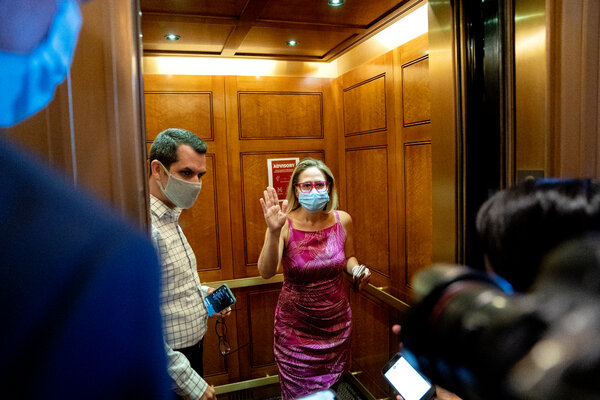 By Jonathan Weisman and Coral Davenport

WASHINGTON — Opposition from a single moderate Democrat to corporate and income tax rate increases has revived efforts in the Senate to draft a tax on carbon dioxide pollution as a way to pay for the Democrats’ proposed $3.5 billion budget bill.

Senator Kyrsten Sinema of Arizona has not advocated a carbon tax, which President Biden and other key Democrats have shied away from as a huge political risk. But her resistance to tax rate increases to pay for the Democrats’ ambitious social policy and climate legislation has set off a scramble for alternatives — at the very least to show her how difficult it would be assemble a package without those rate hikes.

Senator Ron Wyden of Oregon, the chairman of the Senate Finance Committee, confirmed that the Senate majority leader had asked him to craft legislation that would put a price on carbon emissions but to ensure that the policy would respect Mr. Biden’s pledge not to raise taxes on families earning less than $400,000.

That could be done with some kind of rebate or “carbon dividend” during what Mr. Wyden called a “transition” from fossil fuel-powered cars and trucks to zero emission electric vehicles, and from coal- and natural gas-fired electric power plants to renewable energy. Also under consideration: Exempting gasoline from the levy.

“We’ve got a lot of members who care very deeply about this,” Mr. Wyden said, citing Senators Brian Schatz of Hawaii, Sheldon Whitehouse of Rhode Island and Martin Heinrich of New Mexico.

But other senators and Senate aides have confirmed the driver at the moment is Ms. Sinema, the iconoclastic Arizonan whose inscrutable policy positions in an evenly divided Senate can wreak havoc on Democratic plans. She has already said she cannot back a budget plan that spends $3.5 trillion, though she has not said what price tag she can support. Now her position on taxation has Democrats scrambling.

In an interview with The Arizona Republic published on Thursday evening, Ms. Sinema said that climate change was a major concern that drives her approach to the spending bill.

“In Arizona, we’re all too familiar with the impacts of a changing climate … from increasing wildfires to the severe droughts, to shrinking water levels at Lake Mead, damage to critical infrastructure — these are all the things that we’re dealing with in Arizona every day,” she said. “We know that a changing climate costs Arizonans. And right now, we have the opportunity to pass smart policies to address it — looking forward to that.”

Economists have said for decades that a carbon tax, which would make the use of heavily polluting fuels more expensive, is the most effective way to shift the economy away from fossil fuels toward wind, solar and nuclear power, which do not produce the emissions that are heating the planet.