Teachers vote for strike action that will close most schools 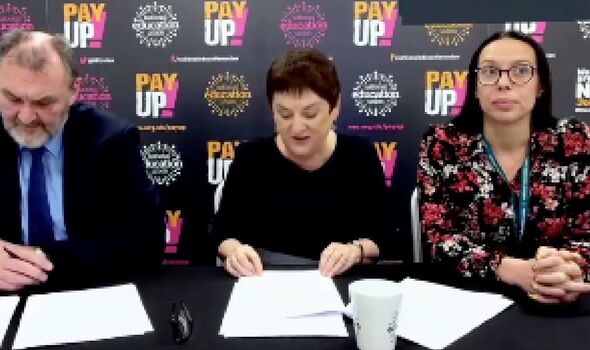 Hundreds of thousands of teachers in England and Wales are set to strike in a dispute over pay. Some 90 percent of teacher members of the National Education Union (NEU) in England voted in favour of industrial action on a 53 percent turnout.

Meanwhile, 92 percent of NEU teacher members in Wales backed strikes with a turnout of 58 percent.

The union has declared seven days of walkouts in February and March, but it has said any individual school will only be affected by four of the days.

The first day of strikes will be on February 1 and more than 23,000 schools in England and Wales are expected to be affected, the NEU has said.

Overall, 300,000 teachers and support staff in England and Wales were asked to vote in the NEU ballot.

Support staff in schools in Wales are also set to go on strike in the dispute over pay after 88 percent of balloted members backed action, with a turnout of 51 percent.

However, the NEU’s ballot of support staff in schools and sixth-form colleges in England did not achieve the 50 percent ballot turnout required by law for action.

The result from the NEU, the largest education union in the UK, comes after a ballot of members of the NASUWT teachers’ union last week failed to reach the 50 percent turnout threshold.

The National Association of Head Teachers (NAHT) is also due to announce its ballot result for strikes on Monday.

The Department for Education (DfE) has offered a 5 percent pay rise to most teachers for the current school year, but the NEU is demanding a fully-funded above inflation pay rise for teachers.

Mary Bousted and Kevin Courtney, joint NEU general secretaries, said: “We have continually raised our concerns with successive education secretaries about teacher and support staff pay, and its funding in schools and colleges, but instead of seeking to resolve the issue they have sat on their hands.

“It is disappointing that the Government prefers to talk about yet more draconian anti-strike legislation, rather than work with us to address the causes of strike action.”

The union leaders added that historic real-terms pay cuts for teachers had created an “unsustainable situation” in the midst of a cost-of-living crisis, adding that staff were leaving the profession “in droves”.

They said: “This is a scandalous waste of talent and taxpayers’ money yet the Government seems unbothered about the conditions they are allowing schools and colleges to slide into.”

Dr Bousted and Mr Courtney added: “It continues to be the aspiration of the NEU and its membership that this dispute can be resolved without recourse to strike action.

“We regret having to take strike action, and are willing to enter into negotiations at any time, any place, but this situation cannot go on.

“We met with Gillian Keegan last week and would be happy to do so again, but no concrete proposals on teacher or support staff pay were put forward.”

On Monday, Ms Keegan told the Commons that she plans to meet with education union leaders later this week.

The NEU said teachers in sixth-form colleges in England, who have already been balloted and been on strike in recent months, will also take part in action on the strike days between February 1 and March 16.

Ahead of the strike ballot results on Monday, Downing Street urged teachers not to strike and inflict “substantial damage” to children’s education.

The Prime Minister’s official spokesman said: “We would continue to call on teachers not to strike given we know what substantial damage was caused to children’s education during the pandemic and it’s certainly not something we want to see repeated.

“We would hope they would continue to discuss with us their concerns rather than withdraw education from children.”

Schoolchildren in Scotland will miss more lessons this week as members of the EIS are beginning 16 days of rolling strike action on Monday.