Home » Politics » The Virginia G.O.P. Voted on Its Future. The Losers Reject the Results.

The Virginia G.O.P. Voted on Its Future. The Losers Reject the Results.

ARLINGTON, Va. — The Republican Party of Virginia has voted four times since December to nominate its candidates for this year’s statewide races at a convention instead of in a primary election. But in a sign of the Trumpian times of denial and dispute in the G.O.P., nearly half of the party’s top officials are still trying to reverse the results.

The refusal of these Republicans to admit that they have lost, or to agree on a set of nominating rules, has fractured a state party already in upheaval: Republicans haven’t won a statewide election since 2009, and they now find themselves with legislative minorities for the first time in a generation. Even the broken windows at the state party’s Richmond headquarters haven’t been fixed for months.

Just a month after former President Donald J. Trump left office, Virginia’s drama is the first state-level boomerang of his legacy. State Republicans have internalized the lesson that there is no benefit to accepting results they don’t like, and the result is a paralyzed party unable to set the date, location and rules for how and when it will pick its 2021 nominees for statewide office, including the race for governor.

The intraparty dispute has scrambled longstanding political alliances and left Virginia Republicans in the awkward position of defending stances that were once anathema to a party that has been redefined by the Trump era.

“It’s very much about not accepting the results and trying to change the rules and game the election,” said former Representative Tom Davis, a moderate Republican who won seven terms in Congress from a Northern Virginia district. “The reality now is even when Republicans pull together, they have a hard time winning, and when they’re divided, they have no shot of winning.”

The party’s decision on Dec. 5 to hold a May 1 convention rather than a June 8 primary was widely seen as an effort to stop Amanda Chase, a firebrand state senator who calls herself “Trump in heels,” from claiming the party’s nomination for governor.

While Ms. Chase or other candidates could win the nomination with as little as 30 percent of the vote in a field with three other major candidates and several lesser contenders, a party convention would require a nominee to win support from at least 50 percent of delegates. 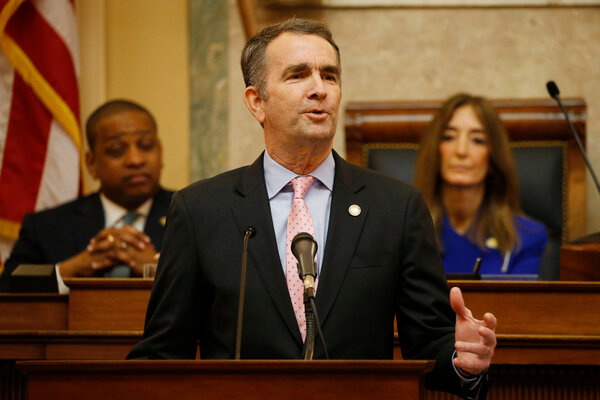 But with the coronavirus pandemic raging and Gov. Ralph Northam, a Democrat who under Virginia law cannot serve consecutive terms, having for now prohibited most gatherings of more than 10 people, there was little chance Republicans could conduct an in-person convention of several thousand people. Changing the party’s rules to conduct a so-called unassembled convention at dozens of sites across Virginia requires approval of three-fourths of the State Central Committee’s members — a threshold so far impossible to meet because those holding out for a primary have refused to compromise.

“The fact that there’s a minority faction who lost that are standing in the way of a safe convention to try to get the primary that they couldn’t win fairly — that says a lot about them,” said Patti Lyman, the Republican national committeewoman for Virginia. “All their arguments can be boiled down to: We lost, and we don’t like it.”

Some proponents of a convention are arguing in favor of ranked-choice voting, a system that has been pushed elsewhere by progressives. Those making the case for a primary argue that it makes it easier for voters to participate. The dispute threatens to undercut Republicans’ already-uphill fight in this year’s elections and prolong Democratic control of the state.

The party’s squabble centers on a crowded group of Republican contenders for governor that includes one candidate each from the G.O.P.’s Trump and establishment wings, along with two wealthy wild cards. The major candidates include Ms. Chase; Kirk Cox, a former State House speaker, who is the favorite of the party’s elected state legislators; Pete Snyder, a millionaire technology executive who lost a bid for the lieutenant governor nomination at a party convention in 2013; and Glenn Youngkin, an even wealthier former chief executive in private equity who is a newcomer to politics.

In past intramural skirmishes, conservative Virginia Republicans have pushed for conventions to give a larger voice to the most hard-line party activists. In 2013, Kenneth T. Cuccinelli II won the nomination for governor at a convention after his social conservative allies boxed out more moderate candidates who preferred a primary.

But the current disagreement has more to do with derailing Ms. Chase and Mr. Youngkin, who threatened to blanket the state with tens of millions of dollars of television advertising ahead of any primary.

Allies of Mr. Snyder have pushed for a convention by arguing that Mr. Youngkin would buy the election if it went to a primary.

“I’m going to run hard and win the Republican nomination regardless of the method of nomination,” Mr. Snyder said. “It’s time for the Virginia G.O.P. to decide the rules.”

There is little establishment support for Ms. Chase, who last month was censured by her State Senate colleagues and stripped of committee assignments after she called the rioters at the Capitol “patriots.” She has recently been required to sit in a plexiglass box after refusing to wear a mask during Senate sessions. Ms. Chase has called it her “square of freedom.”

Mr. Cox, for his part, prefers a primary but has written two letters to State Central Committee members emphasizing his official neutrality in the primary-versus-convention debate.

“They need to resolve it as quickly as possible,” Mr. Cox said. “We need to know the process. But I’ve been very adamant about not weighing in.”

Virginia Republicans face a Feb. 23 deadline to inform state elections officials whether they intend to hold a primary. The state G.O.P. chairman, Rich Anderson, warned in a Jan. 25 letter to committee members that an in-person convention would be impossible and that an unassembled convention could not proceed if supporters of a primary refused to budge from their no-convention stance.

If neither side shifts, wrote Mr. Anderson, who through an aide declined an interview request, the party’s nominees for governor, lieutenant governor and attorney general will be chosen by the 72-member State Central Committee, “which will take on the perception of party bosses huddled in a smoke-filled back room.”

The inability to organize a nominating contest has brought ridicule to a disorganized party aiming to win a statewide election for the first time in 12 years. John Fredericks, a radio talk show host who was the Virginia state chairman for Mr. Trump’s 2016 and 2020 campaigns, has organized bingo games to mock the party’s marathon Zoom meetings, which have each lasted four to eight hours.

“To be four months away from the nomination and not have a process is terribly embarrassing and shows an unwillingness to compromise for the good of the party,” said former Gov. Bob McDonnell, the last Virginia Republican to win a statewide election. “Every passing day hurts whoever our eventual nominee is for myriad reasons.”

Mr. Marston’s stated reason for avoiding media scrutiny is a lawsuit Ms. Chase filed in federal court challenging the party’s decision to hold a convention. But courts have long given political parties wide latitude to set and enforce their own rules for choosing nominees. Few outside Ms. Chase’s immediate circle of supporters believe her lawsuit, which has a hearing scheduled on Friday, will succeed.

Ms. Chase, who was still arguing with less than a week left in Mr. Trump’s presidency that he could yet be inaugurated for a second term, said Thursday that she “doesn’t trust conventions,” which she said unfairly limit voting access for members of the military and others who can’t make it to an in-person site.

“If we’re going to win as Republicans, we need to include more of the electorate who vote Republican instead of less,” she said. “Stop creating so many obstacles for people who would normally vote.”

Ms. Chase this week won support for her primary push from Mr. Youngkin. During an interview with a Charlottesville radio station on Tuesday, Mr. Youngkin, whose supporters want a primary, said it was “not fair” that the party had created uncertainty for the candidates in its nominating process.

“Boy, can I sympathize with Senator Chase on her frustration,” he said. “Here we are on February the 16th, we have an election in November, and we don’t even have a plan to select our candidate. I mean, this is absolutely amazing to me.”

As Republicans across the country struggle with how much Mr. Trump should influence the direction of the party and whom it nominates for key races in 2022 and eventually for president in 2024, Virginia’s Republicans remain mired in their procedural fight.

Those pushing for a primary say they won’t give up.

Thomas Turner, a State Central Committee member who is chairman of the Young Republicans of Virginia, said he was hearing regularly from grass-roots Republicans who were dismayed with the decision to hold a convention and looking for him to keep trying to overturn it.

“I am still wanting a primary because I do believe that is the best way to pick a candidate,” Mr. Turner said. “I will fight for that until the end.”