WASHINGTON – Supreme Court Justice Stephen Breyer warned Americans to think “long and hard” about structural changes to the nation’s highest court, such as adding justices through “court-packing,” in a wide-ranging address Tuesday.

Breyer, the court’s second most senior associate justice, asserted such “alteration” would undermine confidence in the court’s decisions, weakening its hard-won power to act as a check on presidents of both parties and Congress. The court’s authority, he said, is based on the belief its opinions are driven by legal principle and not politics.

“Structural alteration motivated by the perception of political influence can only feed that perception, further eroding that trust,” Breyer, who has served on the court since 1994, said during a two-hour address at Harvard Law School. “There can be no shortcuts to it.”

Breyer, 82, made no reference to speculation about whether he will retire this year. Some liberals have called on him to step down immediately so President Joe Biden can confirm a nominee while Democrats hold a tenuous Senate majority. And while he spoke to past conflicts between the court and White House, Breyer made only a glancing reference to former President Donald Trump – a critic of a court he helped shape.

Breyer’s broader point, that lawmakers should tread carefully in response to talk of adding to the court’s nine-member bench, isn’t new. But it comes at a moment when some on the left are pushing for major change to the federal judiciary to offset Trump’s rapid appointment of jurists, including three current members of the Supreme Court.

Diversity: President Biden wants to put a Black woman on the Supreme Court

Progressive groups point to fears about how the current court will handle racial justice, abortion, immigration and the Second Amendment. Besides expanding the court, some have called for term limits, a code of ethics, a more formal and enforceable process for recusals and an expansion of lower courts. Some of those ideas have bipartisan support, though it’s not clear where they fit into Biden’s broader agenda.

In a move widely seen as an effort to head off a split between liberals and centrists in the party, Biden proposed a commission last fall to study potential changes to federal courts. But the group’s status is unclear and the White House has not responded to questions about its mission or when its members will be named.

The confirmation last fall of Associate Justice Amy Coney Barrett days before the Nov. 3 election gave conservatives an ostensible 6-3 advantage on the court, the most lopsided split since the 1930s. In his remarks, Breyer rejected that kind of political scorekeeping, lamenting that the media and lawmakers often resort to defining a justice based on the political party of the president who nominated them for the lifetime appointment.

“The present court is often described as having a ‘conservative’ majority,” said Breyer, who was nominated by President Bill Clinton. “But the court did not hear or decide cases that affected political disagreements arising out of the 2020…election. It did uphold the constitutionality of Obamacare, the health care program favored by liberals. It did reaffirm precedents that favored a woman’s right to an abortion. .”

Yet several of the cases Breyer cited to reinforce the point were decided narrowly and before Barrett joined the court. The abortion and Obamacare disputes were resolved when Chief Justice John Roberts joined or concurred with four liberal justices. The court is currently considering another blockbuster challenge to the 2010 health care law.

The number of justices isn’t set in the Constitution and changed frequently in the past – and often for political reasons. Congress expanded the court to 10 during the Civil War to ensure a majority for Union policies, cut the nation’s highest bench to seven to deny President Andrew Johnson nominations, and ratcheted it up to nine to give President Ulysses S. Grant majority support on the court for his monetary policies.

In a style reminiscent of his written opinions, Breyer skipped around from Cicero to Shakespeare, from Franklin D. Roosevelt to the late civil rights leader Vernon Jordan. He touched on many of the court’s seminal decisions and was at times comfortable acknowledging he didn’t have all the answers to pressing questions at the court. 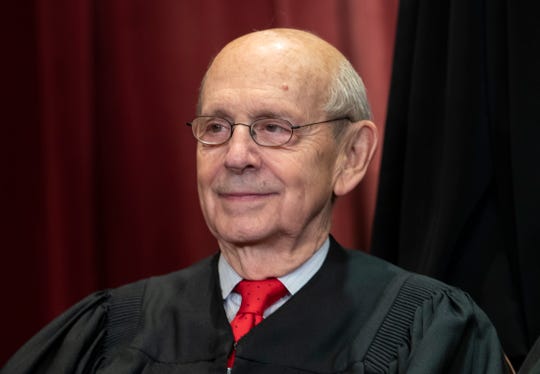 Do jurists who embrace literal interpretations of the Constitution tend to fall in line with conservative ideology, he asked aloud at one point his remarks.

“Some think so,” Breyer said. “But I tend to think: Perhaps. Perhaps not.”

Breyer’s remarks came just days after he penned the court’s opinion in a major battle between tech giants Google and Oracle. Writing for a 6-2 majority, Breyer found Google’s decision to copy thousands of lines of computer code to build its Android mobile platform represented a “fair use” under the nation’s copyright law, an outcome experts say could have a significant impact on how future software is engineered.

The decision meant Breyer was writing snippets of computer code into an opinion in the same week he quoted Cicero in Latin with his Harvard audience.

A philosophy major from California who clerked at the Supreme Court at the height of its push to expand civil rights under then-Chief Justice Earl Warren, Breyer is often described as an “institutionalist” and a “pragmatist.” Another non-political label often affixed to his name – a characterization he embraced – is “optimist.”

“I am an optimist,” Breyer said. “The rule of law has weathered many threats, but it remains sturdy.”