Boris Johnson has put forward a different checking regime involving “red” and “green” lanes for different goods which the UK Government believes will fix the deadlock over trade through Northern Ireland. The British Government argues that goods that are coming to and staying within Northern Ireland pose no risk whatsoever to the EU single market, and have offered a “smart” solution to monitor trade which has been well-received by a tech start-up aimed at easing post-Brexit customs checks.

Kwayga, co-founded by Irish businessman Mike McGrath and Martin FitzGerald, is a unique platform dubbed the “tinder for trade” which matches buyers and suppliers in the food and beverage sector.

Mr McGrath has spoken to Express.co.uk and explained how the firm’s platform is able to help deliver a workable checking regime for food and drinks trade like the one proposed by the UK Government.

He told Express.co.uk: “Certainly I do think there is a solution in it.”

“Like I said, going into different jurisdictions and customs, I went through Stansted and Cork Airport last night and there was a green lane going back into Cork with nothing to declare, it’s the same principle in terms of goods coming over. 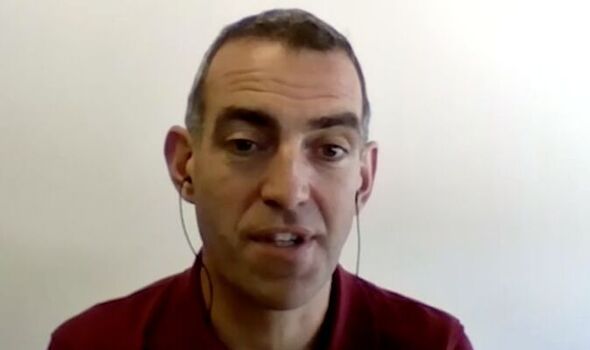 “Pallets and parcels and boxes and containers will go on a green lane if there is nothing to declare to go to Northern Ireland.”

Mr McGrath told Express.co.uk: “It’s that verification and trust that we’re creating about the buyers and the suppliers, they are who they say they and all the information they wil provide around credentials, turnovers, insurances, customs clearance, all information to make the trade happen, it’s transparent and trustworthy.

“What we will be looking to do in future is put some of those transactions possibly on blockchain so there will be there verifiable visible for many different parts and those components are all above board and that’s where you reduce the risk.

“So when items are going say on the green lane on a particular blockchain possibly like ours in the future those trades are transparent and trusted, we don’t need to worry about those. We are talking about 95, 97 percent of items there and that just eases the workload for everyone.”

DON’T MISS:
Brexit ‘leaves Brits with nothing’ as airlines use immigration loophole [WATCH]
Woman’s coffin ‘gets jammed head-first into grave’ at funeral [LISTEN]
Many Brits could be missing a simple diet switch to improve health [INSIGHT]

He continued: “It reduces the workload for the parties and reduces resources for SMEs and businesses to deal with that as well because everything else doesn’t have to worry.

“I think that’s the way it should go in the future where possible.”

Earlier this month, Ireland’s Foreign Minister Simon Coveney was a guest on BBC Radio 4’s Today programme with presenter Amol Rajan when he was asked to comment on the UK Government’s recent steps.

DON’T MISS:
Brexit ‘leaves Brits with nothing’ as airlines use immigration loophole [WATCH]
Woman’s coffin ‘gets jammed head-first into grave’ at funeral [LISTEN]
Many Brits could be missing a simple diet switch to improve health [INSIGHT]

Mr Coveney replied: “It’s not only possible but a solution to that was proposed by the EU in an effort to find compromise and to respond to legitimate Unionists concerns in relation to the protocol last October, which doesn’t seem to have got a whole lot of coverage across the British media.

“But last October, the European Commission came forward with a paper to say that it wanted to negotiate a basis for applying a completely different risk management regime for goods that we can show are being purchased and consumed in Northern Ireland and other words being traded within the UK economy, that we would apply a completely different checks mechanism to basically do away with virtually all checks on those goods.

Mr Rajan noted: “So that principle of different checking where she may be the basis of a future negotiated solution, which I’m trying to think about a way forward.”

The Prime Minister signed the protocol as part of the UK’s Brexit divorce settlement with the EU, with the measures aimed at preventing a hard border on the island of Ireland, but by imposing checks on goods crossing the Irish Sea from Great Britain, it has fuelled unionist anger in Northern Ireland and is also opposed by Eurosceptics in the Tory Party.