Home » Politics » Trump Departs Vowing, ‘We Will Be Back in Some Form’ 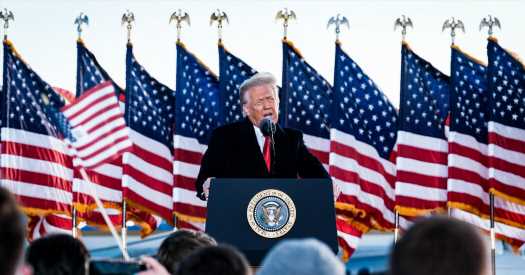 Trump Departs Vowing, ‘We Will Be Back in Some Form’

JOINT BASE ANDREWS, Md. — President Donald J. Trump left Washington aboard Air Force One for a final time on Wednesday, the iconic plane creeping along the runway so the liftoff was timed to the closing strains of Frank Sinatra’s “My Way.”

In many ways, Mr. Trump’s last hours as president were a bookend to the kickoff of his presidential campaign in June 2015. As he did then, he tossed aside prepared remarks that aides had helped draft and spoke off the cuff, having them take down teleprompters they had set up. As he did then, he spent hours focused on the visual aspects of the scene where he would speak at the end of a calamitous final three months that capped a tumultuous term.

Before departing for Florida, Mr. Trump — defeated at the polls, twice impeached, silenced by social media platforms and facing an array of legal and financial problems — laid down a marker about his future, telling the roughly 300 supporters who greeted him on the windy tarmac, several holding American flags, that they had not seen the last of him.

“Goodbye, we love you, we will be back in some form,” Mr. Trump vowed, with the first lady, Melania Trump, by his side in sunglasses and a black outfit. He has yet to say what that form will take, but people who know him said he remained bitter that congressional Republicans had joined in rebuke of his speech at a Jan. 6 rally that incited his supporters to storm the Capitol.

He at one point delivered an understated line: “We were not a regular administration.”

Nonetheless, he performed more regularly in his farewell remarks than at almost any other moment since the Nov. 3. election. He thanked members of Congress with whom he worked, as well as Vice President Mike Pence, whose unwillingness to join in Mr. Trump’s baseless effort to halt Congress’s certification of President Biden’s victory led to a deep rift between them. 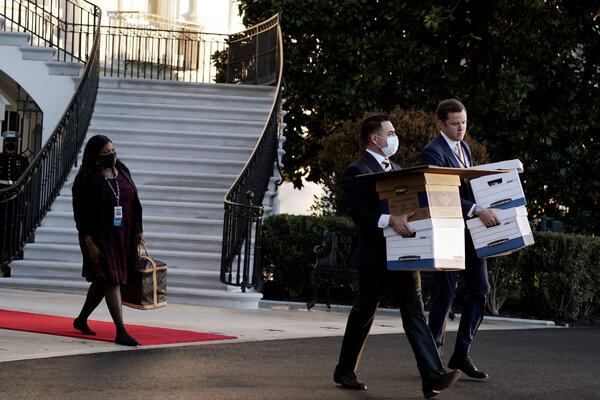 Mr. Pence and the two Republican leaders in Congress skipped Mr. Trump’s departure and later attended Mr. Biden’s inaugural. Mr. Trump did not mention Mr. Biden, but for the first time he wished “great luck and great success”to the incoming administration. (A draft of Mr. Trump’s prepared remarks had included a space suggesting he acknowledge Mr. Biden, but were bracketed in case he did not, according to a person who saw them.)

He did find time to note his own vote total.

And he tried to claim credit for what he suggested would be a string of strong economic news in the coming months. “Remember us when you see these things happening, if you would,” he said.

He similarly sought to promote his record in helping accelerate development of vaccines for the coronavirus. “It really is a great achievement,” he said.

At different points, Mr. Trump seemed as close to becoming emotional as he had throughout his four years in office. He talked about the families who had suffered from the coronavirus throughout the last year.

It was the first time in two weeks that Mr. Trump had addressed the public in person. He stayed mostly out of sight since election night, save for the incendiary speech he delivered to supporters on Jan. 6 urging them to march on the Capitol in an effort to deny Mr. Biden’s victory.

His remarks were riddled with falsehoods and factual errors, boasts about his time in office and demands for credit, including his oft-repeated but exaggerated claim that he had rescued veterans from poor treatment.

He offered a less acid version of his brand of partisanship, save for a few moments. “I hope they don’t raise your taxes,” he said, “but if they do, I told you so.”

He praised his family and said people did not understand “how hard” they worked.

Before the sun rose, officials had constructed a stage adorned with stars-and-stripes bunting, a lectern and a microphone for the president. A military band rehearsed “Hail to the Chief” shortly after 7 a.m.

For several minutes, military aides measured the precise length of the red carpet that Mr. Trump was set to walk to the steps connecting to Air Force One, which was brought out around 6:30. Aides hoisted garment bags filled with the first family’s belongings into the forward cabin.

A large space was built for an audience that the White House had invited to see the president off. But for a man obsessed with crowd size, only about 300 people showed up, filling roughly a third of the standing area.

For several days, aides had tried to corral officials to come to the departure, and to bring guests. But several who remained working until the president’s final day in office said they were worn out and deeply angry over his behavior since Election Day, as he spread falsehoods about the race being stolen from him, overshadowing whatever substantive achievements they might remember. Some of his aides who had been with him the longest said they did not even watch the send-off on television.

Others wanted to steer clear of Washington in its current quasi-militarized state. And still others left the city before the new administration came in, returning to their home states.

Mr. Trump, who often thought about winning but never truly contemplated the presidency before Nov. 8, 2016, began the morning telling advisers he wanted to add one last pardon to the lengthy list of clemency grants he had issued early Wednesday morning. This one was for Albert J. Pirro Jr., the former husband of an old friend, Jeanine Pirro, a Fox News host.

To the surprise of some of his own aides, he left a note for Mr. Biden in the Oval Office, although its contents remained undisclosed. Mr. Trump left the White House for a final time around 8:20 a.m., stopping briefly to talk to reporters before stepping onto Marine One. He described the presidency as the “honor” of his life.

Then he and the first lady boarded the helicopter, taking their last ride as the rest of the Trump family met them at the send-off. The helicopter diverted from its normal route and circled around the Capitol, where two weeks earlier his supporters had chanted about hanging Mr. Pence, vowed to help Mr. Trump remain in office and set off chaos and violence that led to his second impeachment.

When he arrived at the air base, a military band played “Hail to the Chief” and he was given a 21-gun salute, lending his farewell the militaristic patina he craved throughout his presidency. But during the event, his typical rally soundtrack played. When he finished his remarks, he stepped off the stage to the Village People’s “Y.M.C.A.” before heading to the red carpet leading to Air Force One.

The plane then crept along the runway to “My Way,” a cinematic departure for a president who once wanted to be a Hollywood producer. On the flight, Mr. Trump stayed cloistered at the front of the plane with his family, who, like him, have never experienced the effect of a political loss.

When the plane touched down in Palm Beach, Fla., a crowd of about 20 supporters greeted the president. He waved, but did not stop to talk to anyone before climbing into an S.U.V.

The route from the airport to his private club, Mar-a-Lago, was lined with people waving flags, some weeping as he passed. Around 11:30 a.m., Mr. Trump was whisked inside the gates of the Mar-a-Lago compound, leaving behind the press corps that was assigned to cover him for four years. Mr. Pirro’s pardon was announced around that time.

Mr. Trump had another 30 minutes left of his presidency, but he had said all he was going to say.