Home » Politics » Trump Didn’t Ignite an Insurrection on His Own. These Men Handed Him the Match 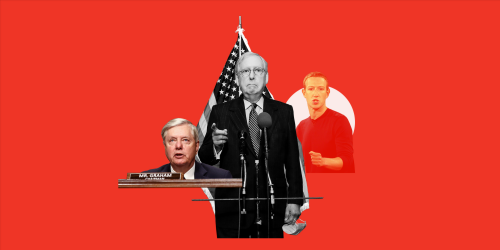 Trump Didn’t Ignite an Insurrection on His Own. These Men Handed Him the Match

Early Wednesday afternoon, Senator Mitch McConnell stood in front of his fellow members of Congress and behaved as if he had a shred of decency left inside his body. Wearing his signature thin-rimmed glasses, he looked all of his colleagues in the eye and said, “We cannot keep drifting apart into two separate tribes with a separate set of facts and separate realities.”

As if he weren’t the one who set the stage for what happened yesterday. McConnell placed the tinder, kindling, and wood into place, and then handed President Trump the match.

Shortly after his speech, a pro-Trump mob moved from a “Stop the Steal” rally to the U.S. Capitol Building, ripped through layers of security, and stormed it. Congress members were told to duck under their chairs and put on gas masks. There was an armed standoff on the House floor. A citywide curfew for 6 p.m. was set. A man sat at House Speaker Nancy Pelosi’s desk, took photos, stole mail, and left behind a note that said, “We won’t back down.” One pipe bomb was found inside the Republican National Committee office, and another one inside the Capitol. Four people are dead.

While men are not the only ones who’ve enabled the President (yes, Ivanka, we all saw the tweet) they have the majority of power in the Republican Party. On the right, women are less likely to be in positions of power—out of the 15 Trump-appointed cabinet positions, only two are held by women—Secretary of Education Betsy Devos and Secretary of Transportation Elaine Chao (who is also Senator McConnell’s wife).

But their attempts at constructing a warped narrative cannot veil the truth: They played a vital role in creating this monster.

Senator McConnell, along with a number of men who stayed silent these past four years, are among the loudest voices who are now trying to backtrack and wipe their hands clean of what happened yesterday. But their attempts at constructing a warped narrative cannot veil the truth: They played a vital role in creating this monster. While President Trump bears the brunt of the responsibility for what occurred in Washington D.C. yesterday, it wouldn’t have been possible without the enablers who surround him:

For tax cuts, judicial seats, and just plain power, countless numbers of men latched onto the President, supported his base, and defended the false proclamations that the election was stolen. They refused to challenge the president in order to protect themselves, and they allowed their party to become a cult devoted to one individual.

They remained quiet when Trump tried to use foreign powers to help take down Joe Biden; when he told the Proud Boys to “stand back and stand by”; and when he refused to commit to a peaceful transfer of power. Now that the violence has escalated to a point where it threatens them and the democracy they claim to love over hate, they’ve sent out tweets and given speeches on the congressional floor to minimize the damage they’ve done by cozying up to the president.

The same people that stoked the fire and fanned the flames by indulging the president and his supporters in their fantasy that the election was rigged are the same people who have quickly moved their hands away, shocked that they got burned.

The dumbfounding scene that played out yesterday wouldn’t have been possible if it weren’t for the propaganda machine (including a number of female anchors and pundits, like Tomi Lahren and Martha MacCallum) that amplified President Trump’s microphone. They framed conspiracy theories as truth and fed viewers racist ideology without question. Instead of telling their audience the facts, they continued to deceive them by pushing the false idea that the election was stolen from the right and that the results could be overturned. The words that they said on television, the radio, and social media manifested into real-life violence.

Right now, in an attempt to create uncertainty and cast doubt over the insurrection on the Capitol grounds, many of these far-right outlets are trying to shift the blame of what happened yesterday onto Antifa. To be clear, that is not accurate.

Twitter, Youtube (which is run by Susan Wojcicki), Reddit, and Facebook have notoriously been hotbeds for white supremacy, elevating those voices, and those ideas, making it easier for them to harass and attack. Even though President Trump’s tweets have consistently broken the company’s terms of service, the CEO of Twitter, Jack Dorsey, allowed him to stay on, unchecked. It wasn’t until after the 2020 election, when President Trump continued to falsely claim that the election was stolen, that they began putting disclaimers on his tweets.

For so long, Facebook’s algorithm favored sensationalist headlines, aimed at garnering clicks, which led to the rise of far-right media platforms like OAN, Daily Caller, and Breitbart. There was little to no oversight on the content these pages put out, allowing a chorus of lies and misinformation to get louder every single day. Mark Zuckerberg has defended these actions by essentially echoing what President Trump said about the “Unite the Right” rally in Charlottesville—both sides needed to be heard. Apparently, sedition was the bar the President had to clear in order for Twitter and Facebook to lock down his accounts on both platforms, which they did on Wednesday.

None of these powerful men get a pass for growing a spine at the 11th hour. Not one. They will not be able to absolve themselves by shifting blame onto others.

To all of them I say, you are complicit, and that is how you will be remembered. Was it all worth it?