Former President Trump returns to the campaign trail on Saturday.

Trump’s heading to Georgia, a crucial battleground in the 2022 midterm elections which may ultimately decide whether Republicans win back control of the Senate, to hold his first post-Labor Day political rally.

But for the former president, the trip also appears to be personal.

Georgia is one of handful of states where now-President Biden narrowly edged Trump to win the White House. And it’s a state where Trump has unsuccessfully tried – and continues to try – to overturn the 2020 election results. It’s also a state where the former president has vowed to defeat an incumbent conservative governor and a Republican secretary of state for refusing Trump’s calls to decertify the results.

“Are you ready for my EPIC Rally in GEORGIA?” Trump wrote this week in a fundraising email to supporters. And he emphasized that “Georgia is critical to our efforts to take back the House and Senate in 2022, and then the White House in 2024, which is why this rally is so important to me.”

Republicans view Sen. Raphael Warnock – who won election by a razor thin majority in Georgia’s twin Senate runoff election in January – as one of the most vulnerable Democrats running for reelection next year. The GOP needs a net gain of just one seat to win back the Senate majority they lost when they were swept in the Georgia runoffs, and Warnock’s seat is one of four they’re aiming to flip from blue to red in the midterms. And two members of Congress from Georgia are on the GOP’s large list of vulnerable House Democrats running for reelection next year, when Republicans need a net gain of just five seats in the 435-member chamber to recapture the majority.

As Fox News first reported earlier this week, Herschel Walker will join Trump and speak ahead of him at the rally, which is being held at the Georgia National Fairgrounds in Perry, in the central part of the state. 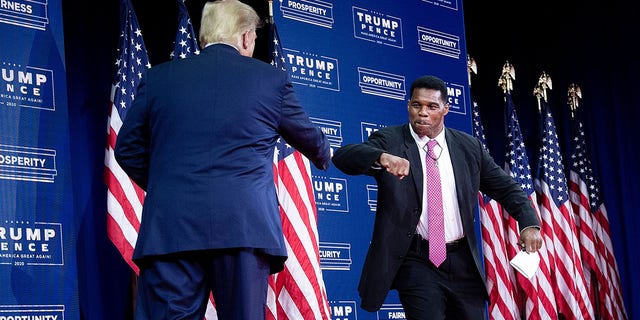 US President Donald Trump is greeted by NFL hall of fame member Herschel Walker during an event for black supporters at the Cobb Galleria Centre September 25, 2020, in Atlanta, Georgia. (Photo by Brendan Smialowski / AFP) (Photo by BRENDAN SMIALOWSKI/AFP via Getty Images)

Trump earlier this month endorsed his longtime friend and former professional and college football star, who after the repeated urgings of the former president, launched a Senate campaign late last month.

Some advisers in Senate Republican leader Mitch McConnell’s orbit had initial misgivings about the former president’s endorsement of Walker – a Trump ally with strong name ID in Georgia, but a first-time candidate who’s untested and comes with baggage that could be used by his opponents, putting in jeopardy the GOP chances of flipping the crucial blue Senate seat red.

As he remains the kingmaker in Republican Party politics and teases another White House run in 2024, Trump continues to repeatedly make unfounded claims that the 2020 presidential election was “rigged” and “stolen” from him

Trump’s endorsed Rep. Jody Hice in his primary challenge against Raffensperger, who along with fellow Republicans Gov. Brian Kemp and Lt. Gov. Geoff Duncan pushed back against the then-president’s efforts to overturn the Georgia results. Trump’s also endorsed state Sen. Burt Jones in the race to succeed  Duncan, who decided against running for reelection next year. Both Hice and Jones will join Walker in speaking ahead of Trump at the rally.

While Trump has yet to support any primary challenge against Kemp, he’s pledged to return to Georgia to campaign against the governor.

“We are still actively engaged in finding somebody to run against Brian Kemp in the primary for next year,” Corey Lewandowski, a former Trump campaign manager and longtime political adviser, told Fox News on Thursday.

But Some Republicans in Georgia worry that Trump’s backing of challengers against sitting Republicans he considers traitors could come back to haunt the GOP in the 2022 general elections.

Duncan charged that Trump’s moves are “counterproductive and confusing to Republicans.”

And he spotlighted criticism that Trump’s claims that the 2020 election was rampant with voter fraud contributed to a suppressed Republican turnout in the January runoffs, which saw GOP incumbent Sens. David Perdue and Kelly Loeffler defeated by razor-thin margins.

“We’ve seen the circus come to town before, most memorably during the runoff with Kelly Loeffler and David Perdue. We watched how 99.9% of the festivities were centered around him, talking about how he was wronged in an election, it was a fraudulent deal, and just creates and sows chaos and confusion as to why people should or shouldn’t show up to vote,” Duncan told Fox News.

While Duncan said he’s “grateful for (Trump’s) conservative leadership,” he predicted that  the former president’s “going to come down here and throw darts at a very conservative governor, throw darts at Brad Raffensperger and my direction, and do nothing about how to help codify and coalesce a Republican majority to win these elections.”