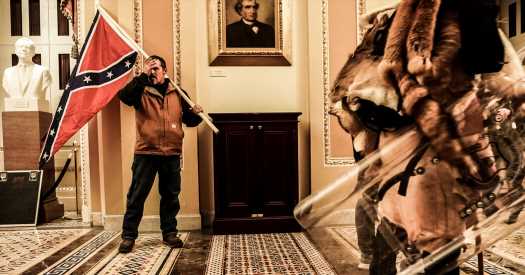 The impeachment managers opened their argument for convicting former President Donald J. Trump on Wednesday with a blunt charge that the pro-Trump mob responsible for storming the Capitol was, in part, motivated by racism.

Representative Jamie Raskin, the Maryland Democrat leading the prosecution on behalf of House Democrats, concluded his opening remarks on the second day of Mr. Trump’s impeachment trial in the Senate by invoking the role played by rioters linked to white supremacist groups.

On the day of the attacks, Jan. 6, some of the rioters brandished Confederate flags inside the Capitol, something that never happened during the Civil War era, while some demonstrators outside the building set up a noose, a chilling echo of the intimidation tactics used against Blacks in the South.

And Mr. Raskin, as he did a day earlier, cast his assertion in deeply personal terms.

He quoted one of the Black officers who battled the mob that day describing his despair at being subjected to racist taunts from a crowd of attackers that was, according to witness accounts and video, overwhelmingly white.

“Afterwards, overwhelmed by emotion, he broke down in the rotunda. And he cried for 15 minutes,” Mr. Raskin said, referring to an article published last month in BuzzFeed News that quoted several exhausted defenders of the Capitol anonymously.

“And he shouted out, I got called an N-word 15 times today. And then he recorded, I sat down with one of my buddies, another Black guy in tears, just started streaming down my face, and I said what the F, man, is this America?” Mr. Raskin said, paraphrasing the account to clean up the language.

A day earlier, Democrats highlighted the heroism of Eugene Goodman, a Black Capitol Police officer, who diverted dozens of angry rioters from where legislators and journalists were hiding, putting himself at great risk. Footage of Mr. Goodman coaxing the demonstrators to follow him was featured in a graphic 13-minute video shown to the Senate on Tuesday.