Trust in Johnson & Johnson's coronavirus vaccine is low, yet overall intent to get inoculated rises: POLL

Fewer than half of Americans see the Johnson & Johnson coronavirus vaccine as safe and barely more than a fifth of those not yet vaccinated would be willing to take it — yet overall intentions to get vaccinated have risen since January in the latest ABC News/Washington Post poll.

Results on the J&J vaccine, in interviews before it was returned to use this weekend, suggest challenges in gaining acceptance: Just 46% think it’s very or somewhat safe, compared with more than 7 in 10 for the Pfizer and Moderna vaccines. And 73% of those not yet vaccinated said they were unwilling to accept a J&J shot.

General reluctance remains substantial. Unpersuaded by more than 570,000 pandemic deaths in the United States, nearly 1 in 4 Americans, 24%, are disinclined to get any of the coronavirus vaccines, down from 32% three months ago. Sixteen percent rule it out entirely.

Seventy-four percent have received at least one dose (56%) or say they definitely or probably will get vaccinated (18%), up 9 percentage points from mid-January. While higher, that’s barely at the low end of estimates of what’s thought to be needed to achieve herd immunity. Hesitancy is highest among rural residents, Republicans, conservatives (especially strong conservatives) and those with no more than a high school diploma. 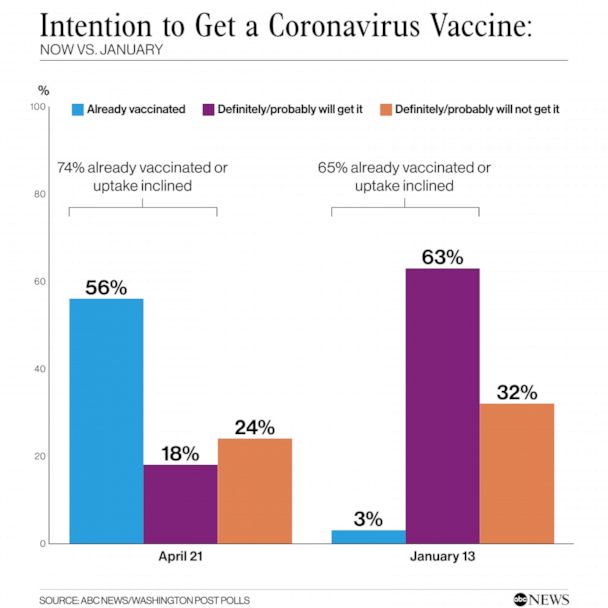 The J&J vaccine situation did not help: A quarter of unvaccinated adults say the halt in its distribution made them less inclined to get vaccinated, including similar shares of those likely and unlikely to get a shot. It’s possible, though not provable, that hesitancy may have eased further had that problem not arisen.

Among other results in the national survey, produced for ABC News by Langer Research Associates:

Trust in the Johnson & Johnson vaccine took a clear hit after federal health agencies called for a pause in its use April 13. Nearly as many think it’s very or somewhat unsafe, 41%, as the 46% who say it’s very or somewhat safe. That’s a sharp contrast to views of the Moderna and Pfizer vaccines, seen as safe by 71% and 73%, respectively.

Still, it’s notable that even for the Moderna and Pfizer vaccines, nearly 3 in 10 either doubt their safety or have no opinion on it.

Trust is a factor in uptake: Among those who see all three vaccines as very safe, 98% intend to get vaccinated or have done so. That falls to 66% of those who don’t have an opinion on one or more vaccine’s safety, and 58% of those who see at least one as unsafe. 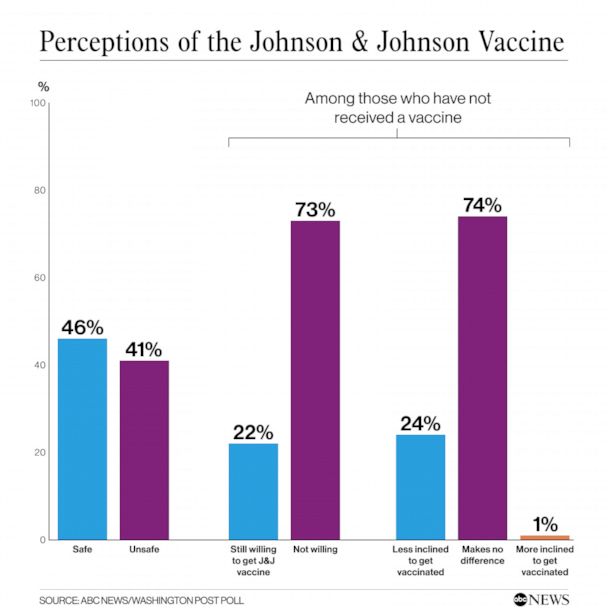 As noted, future uptake of the J&J vaccine — celebrated for being only one shot and easier storage — seems a challenge. Among those who haven’t been vaccinated, just 22% say they’d be willing to get that vaccine now that it’s been put back in use. Even among those who are favorably inclined to get vaccinated, about half say not with a J&J shot.

Seeing the J&J vaccine as unsafe reaches a majority among Hispanic adults (53%), those with no more than a high school diploma (52%) and Republicans (51%). Men are nearly twice as apt as women to be willing to get it, 29% versus 16%. Greater hesitancy among women may reflect reports that all of the very rare cases of blood clots associated with the vaccine have been among women.

Vaccine hesitancy interacts with views on mandates. Among those who’ve been vaccinated or are inclined to do so, 58% support businesses requiring returning workers to get a shot. That plummets to just 7% of those who probably or definitely will not get vaccinated. Divisions are similar on colleges and universities requiring students be vaccinated to be allowed on campus, and on state-issued certificates.

Deep political splits also characterize these views. Support for businesses requiring workers to get vaccinated is far higher among Democrats than Republicans, 65% versus 22%, with independents falling in between. Similarly, support reaches 67% of liberals versus 28% of conservatives, with moderates in the middle. Again, gaps by partisanship and ideology are similar both for college mandates and for state-issued certificates.

The rise in actual or intended vaccine uptake since January differs in some groups. It’s risen most steeply among Hispanic people (+16 points), Republicans (+15), women (+14), conservatives (+13) and suburban residents (+12). 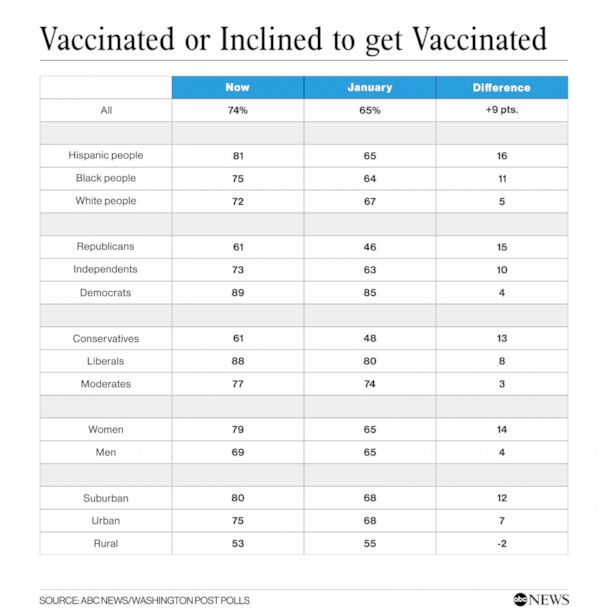 Partisanship and ideology remain factors. Democrats and Democratic-leaning independents are much more apt than their Republican counterparts to have been vaccinated, 70% versus 43%. When it comes to those who remain unvaccinated, 63% of leaned Democrats are inclined to get vaccinated, versus 28% of leaned Republicans. Results are similar among liberals compared to conservatives.

There was no gap in intended or actual uptake among women versus men in mid-January. In the latest results, women are 8 points more likely than men to have been vaccinated, 60% versus 52%. And unvaccinated women are slightly more apt than unvaccinated men to be inclined to get a shot, 47% versus 36%.

This ABC News/Washington Post poll was conducted by landline and cellular telephone April 18 to 21, 2021, in English and Spanish, among a random national sample of 1,007 adults. Results have a margin of sampling error of 3.5 percentage points, including the design effect. Partisan divisions are 33%-24%-35%, Democrats-Republicans-independents.

The survey was produced for ABC News by Langer Research Associates of New York with sampling and data collection by Abt Associates of Rockville, Maryland. See details on the survey’s methodology here.