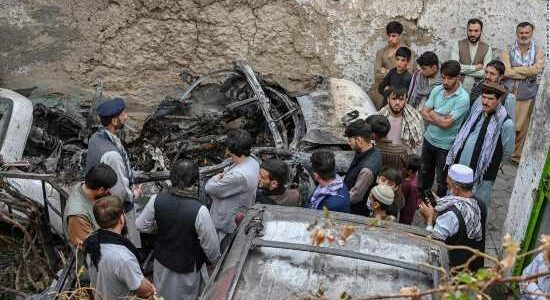 New York (CNN Business)A version of this article first appeared in the “Reliable Sources” newsletter. You can sign up for free right here.

Think back to last month after the ISIS attack at a Kabul airport checkpoint, which killed 13 U.S. servicemembers and scores of Afghans. There was a widespread fear that a followup attack was imminent. That was some of the context when the U.S. military conducted an August 29 drone strike in the heart of Kabul, targeting an alleged would-be bomber.
But then reporters at the scene learned of civilian casualties. And now a pair of investigations by The New York Times and The Washington Post have cast further doubt about the Pentagon’s account. The Times went to great lengths to reconstruct the target’s final day, using surveillance camera footage and satellite images and other methods to buttress traditional interviews. “This man was an aid worker going about his normal day,” Evan Hill told me on Sunday’s “Reliable Sources.”

“What we showed,” he added, “challenges and perhaps contradicts the Defense Department’s case about this man being an Islamic State facilitator, or a man carrying explosives.”

Regarding the supposed explosives, The Post asked experts to analyze imagery of the damage caused by the strike, and found a dearth of evidence “that the car contained explosives,” Nadine Ajaka told me.

On Sunday night the Wall Street Journal editorial board cited the reporting by its rivals and said “the media accounts are compelling in their detail.” The editorial board, faulting the Biden White House, said “the possible mistake has added to the sense of U.S. incompetence and lack of concern for Afghan allies as it sprinted for the exits.”

The power of ‘visual forensics’

Hill and Ajaka are competitors but they appeared together on Sunday’s “Reliable” and complimented each other’s efforts. Hill said both are “part of this new wave of open-source reporting that relies on things that you can get online — videos, photos, data, metadata,” satellite imagery, and more. The materials allows “both us and this community of online open-source researchers to piece together things that no one could piece together a decade ago,” he said.
“So, whereas before we might have had, you know, the account of the government versus the account of the witnesses — and Americans, maybe at least in the past, were inclined to give their government some credence in what it said in the claims that it made — now we can take all of this visual data that you can see for yourself, piece it together for you in a very transparent way, and use that to create a story that holds the power to account and challenges the government’s narrative.”

The Post calls this work “visual forensics.” Ajaka said it can add to “the public’s understanding of an event and also can reveal instances of overreach by those who are in power.”
Visual recreations and reexaminations of events “can be profoundly transparent,” she said, “because it allows readers to understand precisely what we know and what we don’t know by plainly showing it.”
Source: Read Full Article