WASHINGTON — President Donald J. Trump’s four-year quest to wall the country off from immigrants led his aides to Form N-648: a physician’s declaration that an applicant for naturalized citizenship is unable to complete the civics and English-language tests because of a disability or mental impairment.

They saw Form N-648 as an opportunity for an immigrant’s doctor to scam the system. So in July of last year, they made it tougher — increasing the number of questions a doctor must answer to 23 from 12 and adding pointed queries about how the disability affected everyday life and whether it was the result of illegal drug use.

The new version of the form is one of hundreds of little-noticed but consequential revisions to the bureaucratic machinery of the United States’ immigration system that will remain in place unless President Biden’s team specifically looks for — and roots out — the changes.

It was uncovered by Lucas Guttentag, a law professor at Stanford and Yale who has spent the past four years building a database of every change that Mr. Trump made to the immigration system, no matter how small. With the help of 70 of his students, Mr. Guttentag has created what he says is an online road map to the land mines that Mr. Biden will have to find and defuse if he wants to reverse the anti-immigrant agenda that Mr. Trump campaigned on in 2016 and that was executed when he was president by Stephen Miller, his chief domestic aide.

And the land mines are everywhere.

In 2017, Department of Homeland Security Memorandum 2017-01 directed that the Privacy Act no longer applies to the records of noncitizens or legal permanent residents. In May 2019, the State Department updated Form DS-260 to ensure that social media handles are collected from foreigners requesting visas so their posts can be scrutinized. And in December 2020, just weeks before Mr. Trump left office, the Justice Department completed sweeping changes to the Board of Immigration Appeals Practice Manual, making it harder to appeal asylum denials and deportation orders.

Because of minor tweaks made by Trump administration officials, pregnant women are no longer automatically eligible for release from immigration detention. Same-sex partners of U.S. diplomats do not receive diplomatic visas. And thanks to a 2017 update to Volume 12, Part B of the United States Citizenship and Immigration Services Policy Manual, immigrants seeking a change in status who are over 75 are no longer waived from fingerprinting requirements, as they had been since 1998.

“Reform means uprooting the tentacles of every policy and undoing every last vestige of the Trump-Miller agenda,” Mr. Guttentag said. “They can be buried under layer after layer of bureaucratic actions and then essentially devastate the system in untold ways that aren’t discovered until policies are applied in particular cases.”

The former president’s “America First” agenda was hardly hidden while he was in office. Guided by Mr. Miller, Mr. Trump generated one headline after another as he tried to build a “big, beautiful wall” across the southwestern border, separated migrant children from their parents, tried to end protections for “Dreamers” and banned travel from predominantly Muslim nations.

Mr. Biden has spent his first days in office beginning to unravel those well-known changes. He issued an executive order ending the travel ban and formed a task force to reunite the families separated at the border. Another order halted construction of the wall. Still another promised to bolster the Obama-era program for Dreamers known as Deferred Action for Childhood Arrivals, or DACA.

But the search for the smaller, hidden changes is just beginning. White House officials have told immigration activists that it will take time to unravel everything that Mr. Trump and Mr. Miller did to turn the immigration system against immigrants.

“Ninety-nine point nine percent of those were designed to make immigration harder and reduce the number of immigrants coming to this country,” said Todd Schulte, the president of fwd.US, a pro-immigrants rights group. 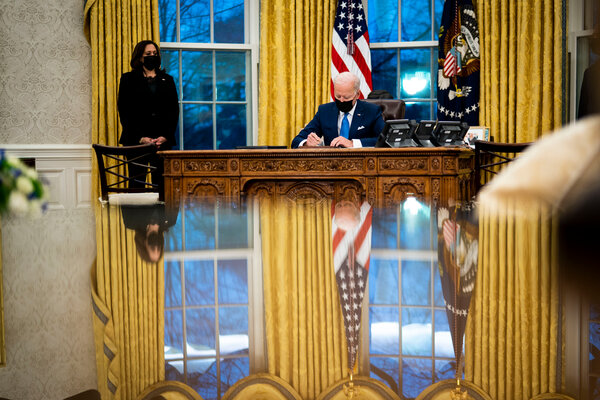 Mr. Schulte said it was critical for Mr. Biden to embrace his significant power over immigration and focus not only on the high-profile changes made by his predecessor, but also on the smaller, less sweeping alterations that might have escaped public scrutiny.

“We’ve got to bring that same dedication and energy that the Trump administration brought for really awful efforts — we’ve got to bring even more power and intensity not just to fixing what they broke, but to ultimately fixing a long-failed immigration system,” Mr. Schulte said.

That was exactly what Mr. Guttentag had in mind early in 2017 as he watched the Trump administration begin to systematically dismantle policies and procedures that he himself had helped to establish.

The founding director of the American Civil Liberties Union Immigrants’ Rights Project and its leader for more than two decades, Mr. Guttentag joined the Obama administration in 2014 as a senior counselor to the secretary of homeland security. After Mr. Trump was elected, Mr. Guttentag began to compile the president’s immigration-related actions in a database that eventually became the Immigration Policy Tracking Project.

The project documents 1,064 separate immigration-related changes made by the Trump administration from 2017 to 2021. They include: 163 changes to forms and information collection; 106 official rule changes; 416 agency directives; 57 presidential orders; 301 changes in practice by agencies and their employees; 16 program terminations; 40 modifications to data and reports; 29 formal changes to the way immigration law is adjudicated; and six legislative proposals.

In many cases, Mr. Guttentag said, the Trump administration attacked parts of the immigration system in a variety of ways, issuing guidance from agencies, changing regulations, changing documentation and announcing presidential directives.

“The dismantling of the asylum protection system was done through, by my count, nearly 30 successive and cumulative measures,” he said. “Every single one of them needs to be addressed and undone.”

The tracker lists changes to immigration policy at the Departments of State, Labor, Homeland Security, Health and Human Services, Justice and several others.

At the Justice Department, one of the most significant changes involved the Trump administration’s new rules for judges who serve on the Board of Immigration Appeals, limiting their ability to open or close cases and making it harder for immigrants to challenge deportation or revisit decisions on asylum.

The new rules have affected Delfin Polanco, an immigrant from the Dominican Republic who has chronic respiratory ailments and post-traumatic stress disorder after working for two years to clean up the site of the World Trade Center after the Sept. 11, 2001, attacks.

Mr. Polanco was ordered deported in 2011 after his marriage dissolved, and his lawyer said Board of Immigration Appeals judges are prevented under the Trump administration rules from reopening his client’s case to avoid his deportation.

“Despite his service to this country, he is vulnerable to being detained and deported,” said Jonathan Langer, a lawyer for Catholic Charities Community Services in New York, who is representing Mr. Polanco. “This affects tens of thousands of individuals, maybe more, who have no options left.”

Throughout his tenure, Mr. Trump targeted both legal and illegal immigration, seeking to reduce the flow of legal visits by foreigners as well as cutting the number of undocumented people in the United States.

Much of Mr. Trump’s attention was focused on the southwestern border. But officials also made it harder for immigrants from other parts of the world, often with little fanfare.

On Oct. 2, United States Citizenship and Immigration Services issued a new policy alert titled “Inadmissibility Based on Membership in a Totalitarian Party.” Some immigration lawyers said the new policy appeared intended to discourage Chinese nationals from applying for permanent status by making it easier for them to be denied because of their membership in the Chinese Communist Party.

“Most Chinese nationals feel the need to enroll as a member of the Communist Party in order to have access to job opportunities and other resources in the country. Some feel it is an absolute must,” said Andrew Wilson, a lawyer in Buffalo. “This is yet another subtle attempt to discourage individuals from pursuing permanent residency, and an attempt to change the law without ever changing the law.”

Even military members were targeted by Mr. Trump’s overhaul of the immigration system.

For more than 200 years, Congress has rewarded noncitizens serving in the military during wartime with an expedited path to citizenship. Since 9/11, over 100,000 noncitizens have naturalized based on their military service.

But in October 2017, the Trump administration instituted changes depriving service members of this path by preventing them from quickly obtaining an N-426 form — a certification of honorable service — required to apply for naturalization. In the past, service members obtained those certifications as soon as they reported to basic training so that they could be citizens by deployment.

Because of the change, some members of the military did not pursue green cards. Others could not benefit from the privileges of citizenship, like sponsoring immediate family members during their service. And nearly all were denied professional advancement opportunities within the military.

“The new policy has forced service members to wait long periods of time to naturalize with devastating consequences,” said Scarlet Kim, a staff lawyer with the A.C.L.U.’s National Security Project.

Mr. Biden has ordered a series of in-depth examinations of Mr. Trump’s immigration policies. In an executive order on Feb. 2, the president directed the secretary of state, the attorney general and the homeland security secretary to “review existing regulations, orders, guidance documents, policies and any other similar agency actions (collectively, agency actions) that may be inconsistent with” the new administration’s approach to immigration.

The tracking system built by Mr. Guttentag, who for several months advised Mr. Biden’s transition on immigration issues, will be central to that effort.

“A huge amount of what happens in government is through administrative action. High-level presidential orders are very visible,” he said. “But what goes on within the bureaucracy is often virtually buried. It’s knowable — as we demonstrate.”

Xiaomi Redmi Note 10 Pro, a mid-range with a better-than-flagship battery, 120 Hz display and a 108 megapixel camera