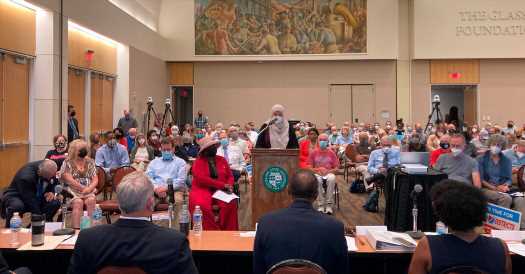 The American Civil Liberties Union and other voter rights groups filed a lawsuit on Thursday challenging the newly drawn state legislative districts enacted last week by a Republican-dominated commission in Ohio, an opening salvo in what is likely to be a series of confrontations across the country as the once-in-a-decade redistricting process unfolds.

In a suit filed in the Ohio Supreme Court, the rights groups accuse the Ohio Redistricting Commission of engaging in “extreme partisan gerrymandering” that violates the state’s constitution in formalizing the redrawn districts, which the suit says “are intended to, and will, entrench a Republican veto-proof supermajority in both chambers of Ohio’s General Assembly for the next four years.”

Alora Thomas-Lundborg, a senior staff attorney with the A.C.L.U.’s Voting Rights Project, said that the suit was the first to challenge a statewide redistricting map drawn using the results of the 2020 census. “Ohio may be the canary in the coal mine from what we can expect from a partisan-dominated map-drawing process,” she said.

The map was enacted in a party-line vote on Sept. 16, with the commission’s five Republicans — including Gov. Mike DeWine; Secretary of State Frank LaRose; Keith Faber, the state’s auditor; and Matt Huffman, the president of the State Senate — prevailing over its two Democrats. But Mr. DeWine foresaw a legal challenge.

“We know that this matter will be in court,” Mr. DeWine said, according to the ABC channel News5Cleveland. “I’m not judging the bill one way or another, that’s up to a court to do. What I am sure in my heart is that this committee could have come up with a bill that was much more clearly, clearly constitutional and I’m sorry we did not do that.”

Ahead of this redistricting cycle, Ohio voters overwhelmingly approved measures amending the state Constitution to limit partisan gerrymandering. A review by the Ohio Supreme Court of the constitutionality of the new map would be the first real test of whether the amendment works as intended.

The suit cites a wide, consistent gap between the share of votes that Republican candidates have drawn and their share of seats in the Ohio Legislature over the past 10 years.

Two years ago, a federal court tossed out the map of congressional districts that Ohio had used for most of the past decade, ruling that Republicans had given themselves an illegal partisan advantage that effectively predetermined the outcome of federal elections.

Mr. Huffman, the commission member who serves as State Senate president, defended the commission’s map last week in an opinion essay in The Columbus Dispatch and accused detractors of trying to apply their own kind of gerrymandering.

“The commission map is both constitutional and compliant with the directives approved under the Constitutional amendment passed by voters in 2015,” Mr. Huffman said. “Make no mistake, special interest groups tried very hard to undermine the process by pressuring members to accept so-called ‘representational fairness.’”