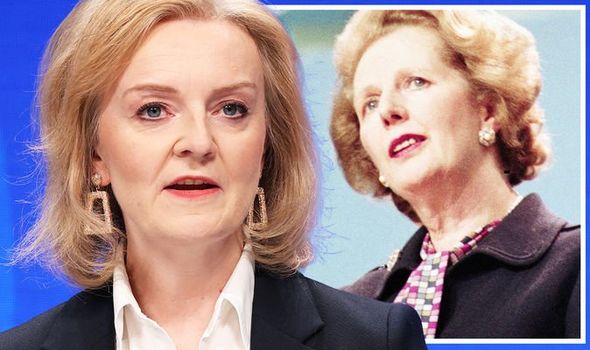 In a speech to the Chatham House think-tank, the Foreign Secretary plans to tell policy wonks that “it’s time for Britain to be proud once again of who we are and what we stand for”. She will hail a new era of an “outward-looking, patriotic and positive” nation.

Ms Truss has already invited comparisons with Margaret Thatcher posing similar to photos that were taken of the first female Prime Minister.

Last week, she posed on top of a tank in seeming homage to a notable shot of Ms Thatcher.

The picture of Ms Truss was taken during a visit to Estonia, amid growing tensions in Ukraine over building Russian forces on the border.

There, she told Vladimir Putin that it would be a “strategic mistake” to invade.

The image echoed a 1986 snap of Ms Thatcher on a tank during a trip to West Germany.

As well as bolstering her own image of a strong leader, Ms Truss is also said to be keen to boost Britain on the world stage.

According to the Mail on Sunday, who claimed Liz is setting herself up as the ‘new thatcher’, she will say during the speech: “We need to believe in Britain and project the best of Britain to the world.

“I want us to be confident, outward-looking, patriotic and positive and to be proud of our great country.”

Ms Truss will add that “rather than being racked with shame about our history and doubt about our future, it’s time for Britain to be proud once again of who we are and what we stand for”.

In the past year, the Government has pushed more for British culture to be celebrated more in the face of wokeism, and for Britain’s colonial past to be understood rather than hidden.

Last summer, when the BBC said it would not sing Rule Britannia and Land of Hope and Glory at the last night of the Proms, Boris Johnson shot back that Britons should not be ashamed about the nation’s past.

He said: “I think it’s time we stopped our cringing embarrassment about our history – about our traditions, about our culture – and we stop this general bout of self-recrimination and wetness.”

The Foreign Secretary wants UK diplomats to be “unleashed and empowered” to promote “the best of British business, culture and values of freedom, democracy and human rights around the world”.

Britain has “so much to be proud of and to share with the world”.

She will reportedly add: “I am putting this at the heart of the [Foreign Office’s] mission – to go out there and show what’s great about this country.

“We have the best diplomats and a world-leading diplomatic network with unique reach and expertise representing us across 180 countries.

“I want our foreign policy to project pride in our country.”

According to a recent survey, Ms Truss remains at the top of a survey of which cabinet ministers are most liked by the party faithful.

A ConservativeHome satisfaction poll, released on November 30, found that the Foreign Secretary had a net satisfaction rating of 82.3 percent.

Meanwhile, Boris Johnson had a negative rating of over 17 percent.

A Foreign Office source told the Mail on Sunday: “Liz thinks we need to be more confident in promoting Britain.

“We’ve got the best diplomats and one of the biggest networks, but we need to do more with it. Think of it as diplomacy unchained.”