‘We’re Here for You’: Biden Meets With Florida Families as Rescue Pauses

Mr. Biden said chances are fading that anyone else would be found alive under the mass of concrete and steel. 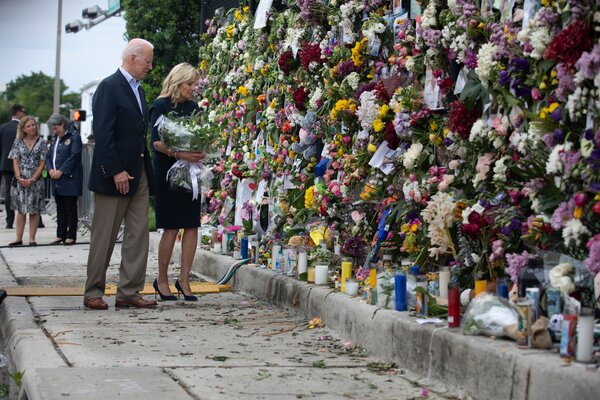 SURFSIDE, Fla. — President Biden spent three hours Thursday consoling the families of those who died or were still missing under the rubble of a collapsed condominium building near Miami Beach, saying “the waiting is unbearable” for agonized relatives as crews halted a desperate search for much of the day out of concern that the rest of the complex could also fall.

In remarks after the private meeting, which was held in a hotel ballroom, Mr. Biden said the families were “going through hell.” Many have been waiting for more than a week for word about whether anyone might still be alive under the concrete and steel.

“I sat with one women who had just lost her husband and her little baby boy, didn’t know what to do,” the president said. “I sat with another family that lost almost the entire family, cousins, brothers, sisters. And to watch them, and they’re praying and pleading and God let there be a miracle.”

For Mr. Biden, confronting the largest national tragedy since he took office was complicated by the fact that he could not eulogize those who were still unaccounted for, or hold out much hope for the missing. “They know that the chances are, as each day goes by, diminished slightly,” the president said. “But at a minimum, at a minimum, they want to recover the bodies. They want to recover the bodies.”

Eighteen people are known to have died in the collapse of Champlain Towers South, and as many as 145 people remain missing, numbers th­at have remained unchanged since Wednesday.

Mr. Biden said that many of the family members asked what he called “basic heart-wrenching” questions: Would they be able to recover the bodies of their loved ones so they could bury them? If not, what should they do?

He added that the families understood the decision to pause the search on Thursday, given the risks to the rescue teams.

The president arrived in Florida hours after rescue workers were pulled off the debris pile amid concern that the rest of the building might fall. Although the search resumed hours later, the delay was another setback for a search that for days had proceeded slowly and without hopeful news.

“They’re working in a very, very unsafe environment,” said Alan R. Cominsky, the chief of Miami-Dade Fire Rescue, who described a large hanging column that threatened to destabilize the remaining structure, as well as movement in concrete slabs and the debris pile, that prompted the pause in rescue work. “I couldn’t pinpoint it to one specific incident.”

The northeast portion of the building, facing the beach, fell to the ground last week, while other units were left standing. But after days of intensive searches, the scene appeared quiet for much of Thursday, with cranes frozen above the rubble.