What President Biden Proposed in His Fiscal 2022 Spending Plan

Here’s a guide to the $1.5 trillion plan, which calls for new funding to support domestic priorities like education, biomedical research and clean energy. 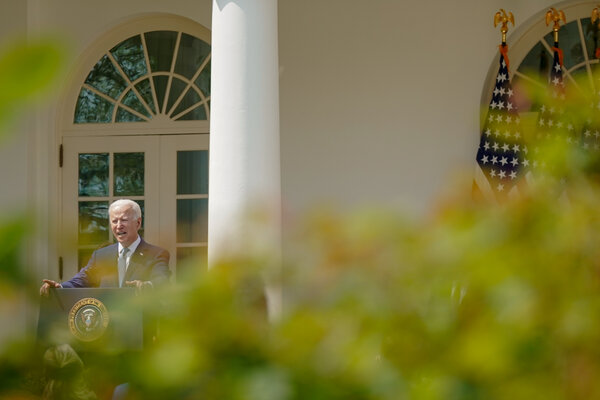 President Biden’s $1.52 trillion spending proposal released on Friday calls for a vast infusion of funds across federal agencies, with proposals for billions of dollars in additional spending in areas like education, public health, climate change and housing.

The plan, which does not include Mr. Biden’s sprawling infrastructure proposals, is for the 2022 fiscal year, which begins Oct. 1.

It represents a sharp break from the budget priorities of President Donald J. Trump, who sought to cut funding for domestic programs.

Here are some of the notable parts of Mr. Biden’s plan.

Mr. Biden’s spending proposal would significantly increase government spending to fight and adapt to the damages of a warming planet.

He proposes more than $14 billion in additional funding compared with the 2021 year, with that money infused across nearly every federal agency.

The broad-based increase in climate spending would come on top of clean energy spending in Mr. Biden’s proposed infrastructure legislation, which would pour roughly $500 billion on programs like increasing electric vehicle production and building climate-resilient roads and bridges.

Over all, the Energy Department would see its funding increased by $4.3 billion, or 10.2 percent over the 2021 fiscal year, including additional money to research and develop technologies like new nuclear power plants or hydrogen fuels. It also includes $1.9 billion for a new initiative that would help deploy low-carbon energy projects around the county and speed up permitting for transmission lines.

The spending plan would also increase funding for the Environmental Protection Agency to $11.2 billion, $2 billion more than the 2021 fiscal year enacted level, including about $110 million to restore hundreds of positions left vacant after employees left the agency in recent years.

And it would fund what the White House calls “the largest investment in environmental justice in history,” requesting $1.4 billion for programs to redress the disproportionate effects of pollution borne by poor and minority communities.

The budget outline aims to embed climate programs into agencies that have not historically been seen at the forefront of tackling global warming. For instance, the Agriculture Department would receive an additional $161 million for programs to measure and verify actions that farmers take to sequester more carbon dioxide in their soil, $100 million to create jobs plugging methane leaks from abandoned oil and gas wells, and a $40 million increase for “climate hubs” that aim to give farmers more information about the effects of climate change on agriculture.