The White House says it “strongly opposes” the creation of a Space National Guard, citing the “need to minimize administrative expenses,” while saying the Biden administration is committed to “prioritizing the development” of space capabilities.

The White House Office of Management and Budget released its statement of administration policy on the National Defense Authorization Act for Fiscal Year 20 – H.R. 4350.

“The administration strongly supports enactment of a National Defense Authorization (NDAA) for a 61st consecutive year and is grateful for the strong, bipartisan work this year by the House Armed Services Committee on behalf of America’s national defense,” OMB said in a statement this week, adding that the Biden administration “looks forward” to working with Congress to “set an appropriate and responsible level of defense spending to support the security of the nation.”

OMB, on a point-by-point basis, went through a number of provisions included in the NDAA, supporting or opposing specific proposals.

“When the Space Force was established, Congress and the administration alike emphasized the need to minimize administrative expenses and prioritize the development of space capabilities; this administration remains committed to that approach,” OMB wrote.

OMB said that establishing a Space National Guard “would not deliver new capabilities,” but instead, would “create new government bureaucracy.” OMB said the Congressional Budget Office estimates the addition would increase costs by up to $500 million annually.

“The Air National Guard and Air Force Reserve units with space missions have effectively performed their roles with no adverse effect on DOD’s space mission since the establishment of the Space Force,” OMB wrote, adding that the Biden administration “looks forward” to working with Congress on “alternative Space Force concepts that are efficient, effective and appropriate for space missions.” 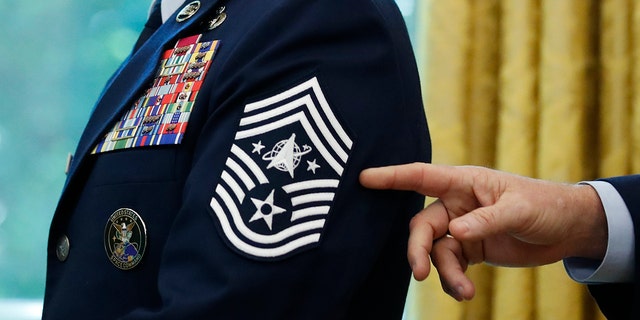 FILE – In this May 15, 2020, file photo, Chief Master Sgt. Roger Towberman displays his insignia during a presentation of the United States Space Force flag in the Oval Office of the White House in Washington. (AP Photo/Alex Brandon, File)

The Space Force was created under the Trump administration, becoming the sixth branch of the U.S. military in 2019. Congress enacted the Space Force in December 2019, which aims to protect U.S. special interests in space capabilities.

When created, the Space Force had a projected size of 16,000 troops and an annual budget of $15.4 billion.

Former President Trump first called for the creation of the Space Force in May 2018. He signed an order in December 2019 to establish the branch.

In January, Fox News first reported that then-Director of National Intelligence John Ratcliffe had designated the Space Force the 18th member of the intelligence community, in a move to “break down barriers” to information sharing and to help inform the community’s analysis of threats in space.

Ratcliffe announced the designation of the U.S. Space Force Intelligence, Surveillance and Reconnaissance Enterprise, which is the intelligence component of the Space Force.