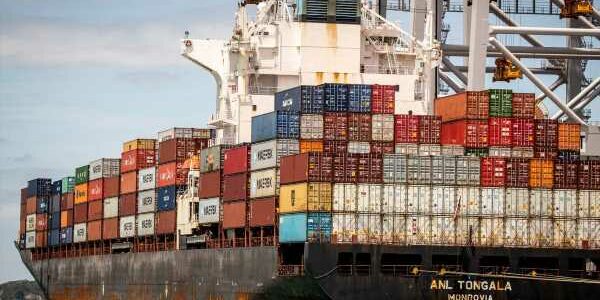 Importers and exporters using Auckland’s port are estimated to have paid more than $140 million to shipping lines in container congestion surcharges – and counting.

Over 12 months from the beginning of October 2020 when global shipping disruption started to bite at the Auckland port, through to September 30, 2021, container congestion surcharges added up to around $146m, believes the Customs Brokers and Freight Forwarders Federation.

A congestion surcharge reflects additional expenses a shipping line incurs when calling at congested ports. The surcharges come on top of soaring standard rates in the Covid-driven shipping boom.

The federation said the figure was estimated on the port handling 481,453 20-foot equivalent unit (TEU) containers of import and export cargo in the period, that were subject to a US$200 ($295) congestion surcharge by most shipping lines.

In fact $146m could be conservative.

Ports of Auckland figures suggest the total number of TEUs handled was close to 490,000 – 8000 more than the federation’s calculation is based on.

Nor is the cost likely to be indicative of more recent surcharge activity.

There’s been an increase in the number of cargo owners using 40-foot containers as they try to combat shortages. These attract a double surcharge. Also some TEU surcharges are now higher than US$200.

Around 10 shipping lines call at Auckland, he said.

“These days, some are charging, some are not. That in itself is a cause for concern.”

The federation, which represents firms that organise freight movement and logistics for importers and exporters, said it the recent announcement by competition watchdog the Commerce Commission that it’s joining international counterparts working to identify potential cartel conduct in global supply chains, he said.

He emphasised that although the continuing congestion was at the Auckland port, it was the shipping lines getting the surcharge money, not the Auckland Council-owned ocean gateway.

“That’s on top of exceptionally high freight rates. They make the argument they’re covering the cost of delays, but I think they’re doing a pretty good job on their pay rate without that additional charge on importers and exporters.”

Maersk’s head of Oceania export market, My Therese Blank, told the Herald the line had not lifted the Auckland surcharge “as we continue to see the impact on productivity levels and vessel delays”.

“Performance remains impacted by the congestion which is increasing operational costs, an example of this is increased bunker costs, alternative cargo routings that increase costs for transshipment, empty [container] positioning costs and lost sailings due to longer vessel turn time,” Blank said.

“The impact on our network from the global supply chain disruption is significant and we have during the past 18 months added four additional vessels to our New Zealand network to increase buffer and network flexibility.”

Blank said most of Maersk Group’s cargo to/from the Auckland region was loaded and discharged at Port of Tauranga, not attracting the surcharge.

Maersk was reviewing the Auckland port’s performance indicators to assess whether to end of the surcharge, she said.

“We are currently experiencing 10 days average waiting time for a berthing window at Ports of Auckland.

“This results in additional [port call] omissions being required and or port rotation swaps to minimise impact to our customers. We have also had to induce services to Auckland to assist in clearing some of the empty container stocks to alleviate the inland depot congestion. The J-Star service connecting New Zealand with north-east Asia – Japan and South Korea – that continues to call Ports of Auckland without omissions, is sliding one vessel position every three weeks – this effectively mean that we are losing 33 per centcapacity of the service.”

CMA CGM and Swires have been approached for comment.