Home » Business » Beijing's sweeping changes to social order are popular with some. Here's why

Beijing's sweeping changes to social order are popular with some. Here's why

Hong Kong (CNN Business)China is urging college graduates to seek jobs in the countryside as youth unemployment in urban areas soars to the highest level in history.

Local governments should attract college graduates to work as village officials, according to a joint statement issued last week by the ministries of education, finance, civil affairs, and human resources and social security.
The government will offer tax incentives and loans to college graduates who start businesses to serve the rural community, the statement added. Similar benefits will be offered to existing small businesses in villages that hire college graduates, including in fields such as housekeeping and elderly care.

Typically, college graduates in China prefer to work for well-paying companies in major cities, and there is a significant income gap between rural and urban areas. But this is not the first time in recent years that the government has urged them to seek employment in the nation’s vast but less developed countryside. 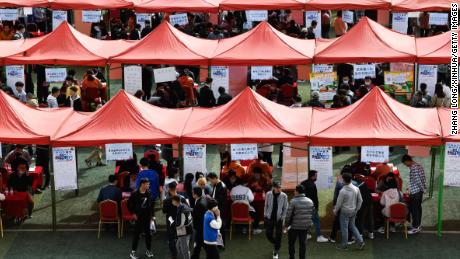 In July 2020, when the initial coronavirus outbreak hit the Chinese economy, authorities encouraged college graduates to move to rural areas, rather than clustering in cities and fighting for limited job opportunities.

These appeals have reminded many on Chinese social media of a government initiative in the tumultuous days of the founder of Communist China, Mao Zedong. Known as the “Up to the Mountains and Down to the Countryside Movement,” the original policy was launched by Communist leaders in the 1960s, ostensibly to move privileged urban youth to far-flung corners to learn about farming and politics from poverty-stricken peasants. The result: China’s “lost generation” who squandered their best years in the countryside.
But, this year, students are running out of options.

Chinese college graduates are facing the toughest graduation season as a record 10.76 million are set to finish college in the next two months. 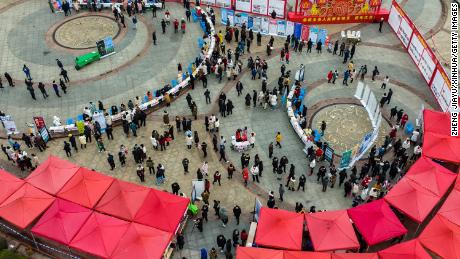 The world’s second largest economy has slowed significantly in the first half of this year, meaning there are fewer urban jobs available. Small businesses — a major source of jobs — have been hammered by China’s sweeping Covid lockdowns.
China’s huge tech sector is also staring at a severe jobs crisis. The once-freewheeling industry was long the main source of well-paid employment in China, but major companies have reportedly been downsizing at a scale not seen before to cope with President Xi Jinping’s regulatory offensive on private enterprise.
The urban unemployment rate for the 16-24 aged soared to a historic 18.2% in May, according to most recent government statistics. The figure did not factor in new college graduates for this year.
China only surveys employment in urban areas.

As the employment situation deteriorates, getting into a college is becoming even harder in China.
A record number of 11.93 million students took the country’s grueling college entrance examination last week. These students are competing to get in to the country’s top universities, often under enormous pressure from their parents and families.
This year, students have taken to social media to complain about how exceptionally difficult the exam was, and related topics have been trending on Weibo since the weekend.

According to social media posts, many students burst into tears while taking the maths test, and some complained that questions in the Chinese literature test were so “insanely” difficult that even authors of those classical books wouldn’t be able to understand them.
Responding to the online controversy, the education ministry said in a state media interview that the difficulty of the mathematics exam is to “play the role of selection” and better serve the government’s goal of building a quality eduction system.
Source: Read Full Article