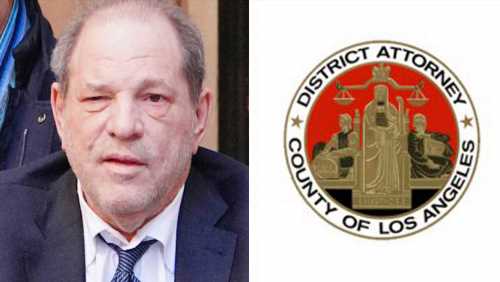 Harvey Weinstein’s Extradition To LA To Face Rape Charges Set For May 30, Maybe

Harvey Weinstein could be heading out to Los Angeles within week to face multiple counts of sexual assault. Or not.

In a short, but somewhat convoluted virtual hearing this morning, the lawyer for the already imprisoned producer promised to throw a habeas corpus spanner in the works if the proceedings didn’t hit the reset button. If Weinstein’s attorney doesn’t not do that, then come May 30, LA officials will “make arrangements to have him transferred,” noted a masked Judge Kenneth Case on Friday.

It likely won’t be so straightforward.

“I intend to file,’ declared attorney Norman Effman to the Erie County courtroom on camera as Weinstein watched from his current maximum-security digs. “I will do it as quickly as possible, I won’t do it on the 29th day, but I won’t do it on the second day, “the East Coast lawyer added the clocking already ticking on a strict 30-day timeline to move Weinstein from one side of the country to another and 11 counts of sexual assault in the LA courts.

If found guilty in the City of Angels, the 69-year old Weinstein could receive a sentence of up to 140 years. Weinstein is currently behind bars in New York State since March last year on a 23-year sex crimes sentence.

Seeking to stymie the Erie County District Attorney’s office in procedural netting, Effman mockingly refereed to the whole matter as a case of “Groundhog Day.”

With a new indictment coming against Weinstein out of LA earlier this month, the once time moguls lawyers have been arguing that the whole more than a yearlong extradition process needs to go back to square one.

To that end, Effman in the past week or so filed a petition challenging the current extradition paperwork. In response, the LA DA’s office filed new paperwork and served Weinstein himself at Wende Correctional Facility near Buffalo, NY. on April 27.

“We are eager to defend Harvey against these spurious charges, but not unless he is first allowed a fair and lawful extradition process that will adhere to the requirements of the Interstate Compact and account for his ongoing medical treatment in New York and the fact that COVID still prevents him from having an in-person trial in the Los Angeles courts for the foreseeable future,” Weinstein’s West Coast attorney Mark Werksman told Deadline after the hearing was over.

Out in the Golden State, Weinstein faces four counts of rape, four counts of forcible oral copulation, one count of sexual penetration by use of force, and two counts of sexual battery by restraint and sexual battery in incidents involving five women from 2004-2013 in LA County. Aiming for maximum media exposure in an election year, the charges were first announced by former L.A. DA Jackie Lacey on January 6, 2020, the very day that Weinstein’s Manhattan sex crimes trial started, with more added later.

Incumbant Lacey was defeated last fall in a tight race with former San Francisco DA George Gascón. As the new and sealed indictments of earlier this month make clear, the current DA is trying to move the matter along ASAP.

That could all become moot if Governor Andrew Cuomo steps in and personally denies the extradition, as he can under New York law. But truthfully, that Hail Mary for Weinstein seems both politically and practically unlikely.

Wearing the same burgundy jumpsuit as he did in the last extradition hearing two weeks ago and with an associate of Effman in the room with him, Weinstein did not chat with his lawyers today as he did on April 12. However, he did toss in a “thank you, your honor” when the less than 30-minute online gathering was over.

As has become the norm in such virtual hearings the past year of this pandemic, there were a few technical glitches, including a cheery cell phone ringtone going off as representatives from the Erie County D.A.’s office was speaking.

Of course, the events of the extradition are all going down as a new battle is flaring up in Weinstein’s East Coast incarceration. On April 5,  the Oscar winning producer’s defense team filed his long-anticipated appeal on the decades long sentence he began serving last spring after being found guilty of two sex crime felony charges. The office of retiring Manhattan D.A. Cyrus Vance Jr. has not yet filed a response to that appeal. However they are expected to do so in the next few months, whether Weinstein is in LA by then or not.