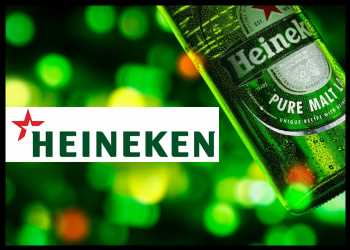 Shares of Heineken NV were gaining around 3 percent in the morning trading in Amsterdam after the Dutch brewer reported a profit in its fiscal 2021, compared to last year’s loss, driven by strong revenue and volume growth, despite weak results in APAC region.

Further, the company announced higher dividend, and said it sees stable to modest sequential improvement in operating profit margin (beia) in fiscal 2022, and higher margin in fiscal 2023 amid increasing costs.

The company said, “Whilst continuing to target 17 percent operating margin (beia) in 2023 and operating leverage beyond, there is increased uncertainty given current and evolving economic and input cost circumstances. Therefore, we will update the 2023 guidance later in the year.”

The company said it expects to be significantly impacted by inflation and supply chain resilience pressures. More specifically, input cost per hectolitre (beia) would increase in the mid-teens amid the hedged positions and the sharp increase in the prices of commodities, energy, and freight. However, these input cost increases will be offset through pricing in absolute terms, which may lead to softer beer consumption.

For 2021, a total cash dividend of 1.24 per share euros, representing an increase of 77.1 percent, will be proposed to the Annual General Meeting on April 21. If approved, a final dividend of 0.96 euro per share will be paid on May 3.

Operating profit improved with strong recovery in Europe, AMEE and the Americas, partially offset by the impact of the pandemic in APAC.

Premium beer volume grew 10 percent annually, accounting for more than 60 percent of total organic growth in beer volume in 2021. Growth in premium is led by Heineken, up 17.4 percent, significantly outperforming the total beer market and well ahead of 2019.

In Amsterdam, Heineken shares were trading at 97.66 euros, up 2.5 percent.