Home » Business » Here's why used car prices are so high

Here's why used car prices are so high

New York (CNN Business)US auto sales soared in the second quarter. But the uptick could have been much bigger.

Automakers have struggled to find the computer chips required to build enough cars and trucks to meet demand, with most temporarily shutting their factories as a result of the shortage. The tight supplies drove up car prices to record levels, which also limited the volume of sales.
Sales looked particularly strong when compared to the same period last year, the worst quarter for car sales since the Great Recession. In that period both factories and most dealerships shut down for a different reason — safety protocols and stay-at-home orders related to the pandemic.

But even when compared to sales in the first quarter of this year, several automakers showed improved numbers.

“Consumer demand for vehicles is also strong, but constrained by very tight inventories,” said Elaine Buckberg, General Motors’ chief economist. “We expect continued high demand in the second half of this year and into 2022.”

GM (GM) reported a 40% jump in sales in the quarter compared to a year earlier, and a 7% increase compared to the first quarter this year. Toyota (TM) sales soared 73% jump compared to a year ago, and had a 14% bump compared to the first quarter.
Sales at Stellantis, the automaker formed by the merger of Fiat Chrysler and France’s PSA group, rose 32% over the year and 3% compared to the first quarter. Hyundai’s sales jumped 69% year-over-year and 43% from the first quarter. Other major automakers are due to report sales later Thursday or Friday.
Still, said Michelle Krebs, executive analyst at Autotrader, “It could have been so much stronger. The story is inventory, it has really plummeted.”
Krebs said the latest reading shows dealers with an average of only a 30-day supply of vehicles on lots, well less than half of normal inventory. And for the popular models, it’s far lower.
“Buyers are holding off because they can’t find what they want on the lot and prices are record high,” she said.
The automakers were focused on building large pickups and SUVs over other vehicles. GM’s sales of the Chevrolet Silverado pickup, its best-selling vehicle, increased 30% from the first quarter and sales of the Chevy Suburban SUV were up 21%. Meanwhile, sales of the Malibu sedan fell 82% from the first quarter, while purchases for the Impala sedan fell 45%.
The demand for autos, especially SUVs and pickups, has come back much stronger than most in the industry expected last year when tens of millions of workers lost their jobs and the economy fell into recession. That is one of the reasons for the computer chip shortage — automakers canceled orders for chips they didn’t think they’d need and then couldn’t restore those orders when demand rebounded more than expected. 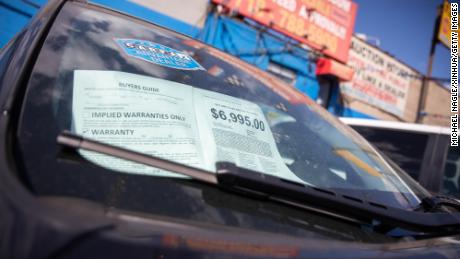 Most automakers have said they expect the second quarter will prove to have been the most difficult time to find chips, and that supplies should improve going forward. But Ford announced plans to have some temporary shutdowns in July, a sign that the problem is not yet in the rearview mirror.

Automakers have also been limiting the number of sales they make to fleet customers, such as rental car companies that buy vehicles in bulk but at a discounted price. It will take a while for the automakers to meet the pent-up demand for cars going forward, Krebs said.
“It’s going to take time to fill the pipeline,” she said.
Source: Read Full Article