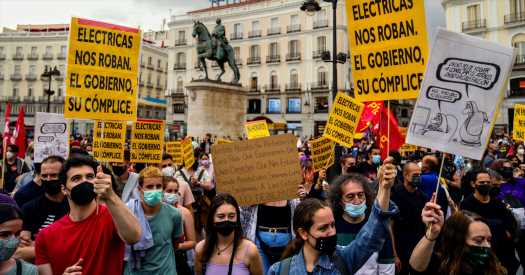 LONDON — As the world struggles to recover from the pandemic, soaring natural gas prices threaten to become a drag on the economies of Europe and elsewhere. Wholesale prices for the fuel are at their highest in years — nearly five times where they were at this time in 2019, before people started falling ill with the virus.

The high costs feed into electric power prices and have begun showing up in utility bills, weighing on consumers whose personal finances have already been strained by the pandemic. The price jumps are unusual because demand is typically relatively low in the warmer summer months, raising alarms about the prospects for further increases when demand jumps in the winter.

Spanish households are paying roughly 40 percent more than what they paid for electricity a year ago as the wholesale price has more than doubled, prompting angry protests against utility companies.

“The electricity price hike has created a lot of indignation, and this is of course moving onto the streets,” said María Campuzano, spokeswoman for the Alliance against Energy Poverty, a Spanish association that helps people struggling to pay energy bills.

The pain is being felt across Europe, where gas is used for home heating and cooking as well as electric power generation. Citing record natural gas prices, Britain’s energy regulatory agency, Ofgem, recently gave utilities a green light to increase the ceiling on energy bills for millions of households paying standard rates by about 12 percent, to 1,277 pounds, or $1,763, a year.

Several trends are to blame for soaring prices, including a resurgence of global demand after pandemic lockdowns, led by China, and a European cold snap in the latter part of winter this year that drained storage levels. The higher-than-expected demand and crimped supply are “a perfect storm,” said Marco Alverà, chief executive of Snam, the large gas company in Milan.

The worry is that if Europe has a cold winter, prices could climb further, possibly forcing some factories to temporarily shut down.

The jump has prompted some to call for an acceleration of the shift from fossil fuels to clean domestic energy sources like wind and solar power to free consumers from being at the mercy of global commodity markets.

“The reality is we need to switch to renewables faster,” said Greg Jackson, chief executive of Octopus Energy, a British utility.

On the other hand, the turbulence in prices may also be a harbinger of volatility if energy companies begin to give up on fossil fuel production before renewable sources are ready to pick up the slack, analysts say. In addition, the closure of coal-fired generating plants in Britain and other countries has reduced flexibility in the system, Mr. Alverà said.

Gas prices in the United States have risen as well, but they are only around a quarter of those being paid in Europe. The United States has a big price advantage over Europe because of its large domestic supply of relatively cheap gas from shale drilling and other activities, while Europe must import most of its gas.

The immediate worry for markets in Europe is that suppliers have not followed their usual practice and used the summer months to fill storage chambers with cheap gas that will be used during the winter, when cold weather more than doubles the consumption of gas in countries like Britain and Germany.

Instead, suppliers responded to the cold weather late last winter by draining gas storage facilities. Subsequently, they have been reluctant to top them up with high-priced gas. As a result, European storage facilities are at the depleted levels usual in winter rather than the peaks of fall.

“The market is very nervous as we move into the winter season,” said Laura Page, an analyst at Kpler, a research firm. “We have very low storage levels for the time of year.”

Europe imports around 60 percent of its gas, with supplies coming by pipeline from Russia and to a lesser extent Algeria and Libya.

Liquefied natural gas, arriving by ship from the United States, Qatar and elsewhere, usually helps balance the market. This year, though, L.N.G. carriers have been drawn to higher prices in China, South Korea and Brazil, where a drought has caused a drop in power generated by dams.

As a result, Italy, Spain and northwest Europe have seen a sharp decline in liquefied natural gas infusions, according to data from Wood Mackenzie, a market research firm.

Adding to the tight situation in Europe, Groningen, the giant gas field in the Netherlands that long served as a safety valve for both its home country and western Germany, is being gradually shut down because of earthquakes. Over the last year European gas prices have risen from around $4 per million British thermal units to about $18.

Russia, the largest gas supplier to Europe, and Algeria have substantially increased their exports but not enough to ease market concerns. Some analysts question whether Gazprom, Russia’s gas company, is pursuing a high-price strategy or trying to persuade the West to allow the completion of its Nord Stream 2 pipeline project, which will deliver gas from Russia to Germany.

“On the face of it, it looks as though some sort of game is being played here,” said Graham Freedman, an analyst at Wood Mackenzie. On the other hand, Mr. Freedman said, it could be that Gazprom doesn’t have any more gas to export.

A spokeswoman for Gazprom said: “Our mission is to fulfill contractual obligations to our clients, not to ‘reduce the concerns’ of an abstract market.” She added that Gazprom had increased supplies to near-record levels this year.

Construction of the 746-mile pipeline, which runs under the Baltic Sea, was halted last year just short of completion off Germany’s shores by the threat of sanctions from the United States. But in a deal with Germany in July, the Biden administration agreed to drop its threat to stop the pipeline. On Monday, the management company for the project said it aimed to have the pipeline operating this year.

Stanley Reed reported from London, and Raphael Minder from Madrid.